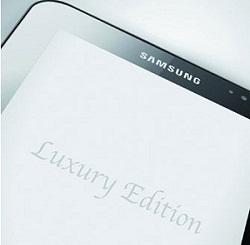 It looks like Samsung is preparing a “Luxury” edition of its Android-powered Galaxy Tab that will cost nearly $1,000.

The Luxury Galaxy Tab was reportedly unveiled at the Millionaire Fair and, as you’d expect from a fair with that name, it seems to be aimed at people with more money than sense. Sure, you get the sense of being better than others because you can afford to pay $1,000 for this Android tablet but you won’t be getting much bang for your buck.

The Luxury Galaxy Tab will clock in at about 749 Euros, roughly $1,000, and you’ll be getting an exclusive leather case to carry the tablet in and a Bluetooth headset. That’s about it.

There’s no word on if this will come with 3G connectivity like the U.S. versions and that would make it even less of a deal. When you consider that the WiFi-only version of this Android tablet should cost about $500, you’ll be paying twice the amount for the device for a case and a headset.

Putting aside the ridiculous price, the Luxury Galaxy Tab should still deliver a decent experience. I’ve been playing with the Verizon version for about a week now and I’m pretty impressed with the 7-inch tablet.

It’s portable enough to actually fit in a pocket if I really wanted it too and the screen works well for most websites and apps. Sometimes, I miss the extra real estate of the Apple iPad sometimes when I’m browsing but the portability is quite nice with Samsung’s Android tablet.

I’m really digging this tablet but feel like the glut of other Android-powered devices coming out in the next few months make it too difficult to recommend Samsung’s device. I mean, we should only be a few months away from a dual-core tablet from Motorola with Android 3.0 Honeycomb.