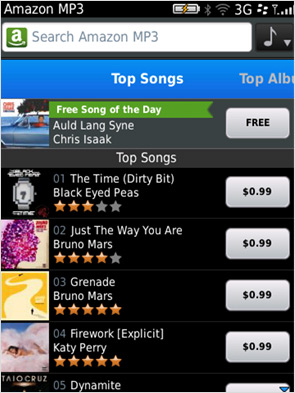 The Amazon MP3 store has been on Android and webOS since their respective beginnings, and now they’re adding BlackBerry to their roster. Using the new app, users will be able to search, browse, buy, and download (over Wi-Fi or 3G) any of their 14 million songs. Every track has a 30-second sample so you can see if it’s what you’re looking for, and share tracks with social networks if you’re especially happy with a purchase. The app is also OS 6-optimized, so you can search the Amazon MP3 store simply by typing from the home screen. Arguably Amazon’s biggest selling point is their loose DRM, enabling you to move around music files as you see fit, though none of the app information mentions what kind of locks are in place.

Music is far from the only thing Amazon is interested in selling on mobile. There’s of course their e-book app, Kindle, which works across multiple devices, and there are rumblings that they’ll be launching their own app store for Android. Even if you’d prefer to do your shopping on iTunes, there are tools available to bring your tunes from there onto your BlackBerry.

When it comes to digital music, Amazon is something of a powerhouse distributor, and their entry into BlackBerry could mean bad things for folks established in BlackBerry music like Pandora, Slacker, 7digital, rdio, and others. Luckily, many of those are subscription-based services, so appeal to a slightly different music shopper, and even Amazon isn’t impervious to competition; I think once Grooveshark gets its BlackBerry game together (the current app is in a sore state), they’ll have an extremely good run. There’s also a lot of room for competition in music ID services, which is currently ruled on BlackBerry by Shazam. Music stores tend to be closely tied in with music ID programs, and as such I wouldn’t be surprised to see any pay-per-track outlet (like Amazon MP3) include it as a feature in future versions of their app.

If you want to give it a shot, you can find Amazon MP3 in the BlackBerry App World below.

Mobile phone applications are the hottest things since sliced bread, but you don't need me to tell you that. Earlier...