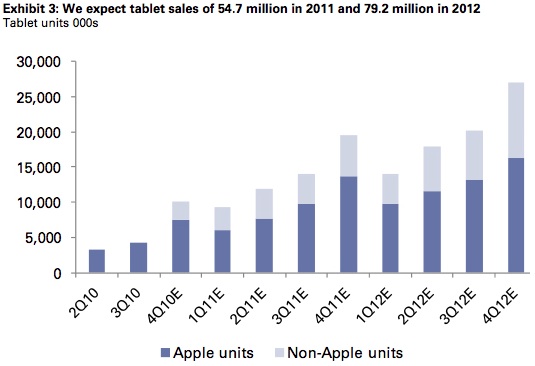 Bill Shope from Goldman Sachs recently published a research note that was parsed through by All Things Digital and it says that next year there are going to be 54.7 million tablet devices sold, jumping up to 79.2 million in 2012. A majority of them will be the model that started it all, the Apple iPad. Bill also states that if you combine the tablet and PC space, something we’re not sure is wise to do since they’re two completely different consumer electronics categories, then Apple’s share would break 12%. A massive increase to the 4.4% market share that Apple has today, a figure they haven’t hit since 1996.

“Apple’s share of the PC market has been below 5 percent for most of the past 15 years, and even with the much-hyped ‘iPod halo effect,’ this level hasn’t changed in recent years. With the iPad, however, Apple is now offering a unique computing device that is priced for the mass market. In fact, our Apple forecast assumes that the iPad segment will surpass Apple’s Mac business in revenues and profits by the end of fiscal 2011–the first full year of iPad shipments … If we include tablets in our PC unit forecast, then our estimates suggest Apple’s combined iPad and Mac market share would reach 12 percent in 2011. Based on the current market share breakdown in the PC market, this could presumably make Apple one of the largest vendors in the combined PC and tablet market.”

For a space that’s less than a year old, the iPad only started shipping in April of this year after all, these numbers are a bit hard to swallow. We know Google is working on a version of Android optimized for tablets, hell we’ve even seen the first prototype from Motorola, but I’m still skeptical that tablets will catch the consumer imagination. It’s yet another screen when the laptop and smartphone are more than enough.

Duke Nukem 3D for iPhone and iPad Available for Free

Probably one of the most classic first-person shooters of them all, Duke Nukem, is now available for free in the...