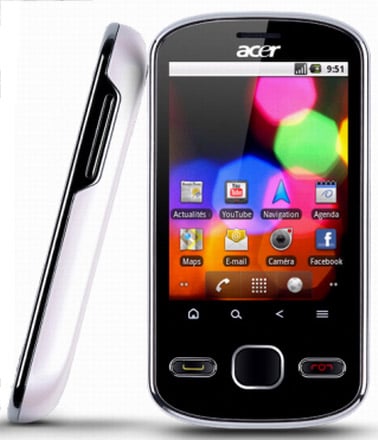 Two weeks after we covered the Acer beTouch E140, the Taiwanese company officially announced the device in the UK. As you may know from our previous post, we’re talking about an entry-level Android smartphone which prides itself with a 2.8-inch QVGA touchscreen, 3.2-megapixel camera, 600MHz processor, WiFi and HSDPA connectivity, GPS, Bluetooth, FM radio and a microSD expansion slot (supports memory cards of up to 32GB). Android 2.2 Froyo is running the show.

In other words, we think of the beTouch E140 as a perfect first Android smartphone, which packs all the connectivity options, location-based capabilities and just enough power to get you started.

Price was not announced, but we think it will most likely be around 150 GBP for an unlocked device — or starting from free with some monthly plan.

Finally, now that the UK market is “cleared,” I would expect to see Acer launching the device across other markets in Europe…

Orange France launched Telmap-powered Orange Maps V2, a multi-platform mobile navigation solution. The new offering will be included on all...