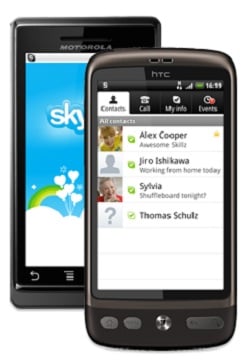 Skype is not resting on its laurels when it comes to the smartphone space, as the company has just updated its VoIP-calling Android app to be more convenient for users.

First of all, you can now use the Skype Android app on the Samsung Galaxy S handsets, kind of. The VoIP-calling app will only be available for handsets with Android 2.2 or Froyo, which is still probably a long time from coming to the Galaxy S devices in the United States.

This is a pain in the you know what because it’s depriving Galaxy S users of the Skype Android app. We know there are more than 3 million of these in the United States alone, so this is a lot of people who can’t have access to this service.

One of the reasons this may be relegated to Froyo is the ability to now put Skype on the SD card. The data will still be stored on your phone but having this on your SD card will make it easier to bring this app to a new device without having to quickly download it again.

These are nice little additions for the VoIP-calling company but we’re still waiting for it to add some more killer features to its portfolio of mobile apps. We know that it is going on a hiring spree in order to beef up its mobile products and we’re looking forward to what it can come up with.

One natural fit for the Skype Android app is the ability to make video calls on the go. This would make a lot of sense because multiple phones with the little, green robot like the Nexus S and EVO 4G come with front-facing cameras. Additionally, rivals like Apple’s FaceTime and Qik are rapidly making mobile video calling an expected feature.

Well look who's playing with the big boys with 4G in the big cities--it's MetroPCS. The carrier has launched LTE...