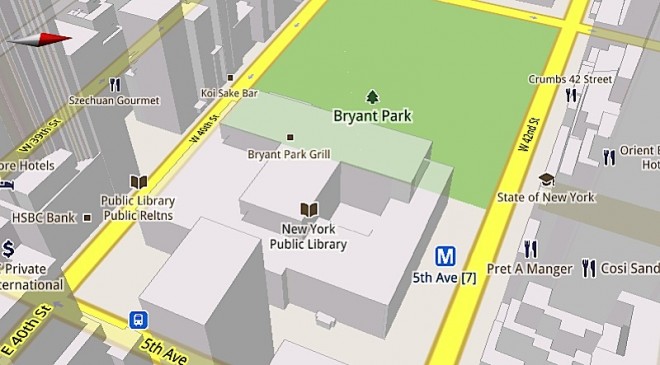 Remember how we told you that Google Maps for Mobile 5 was on it’s way to Android with a slew of new eye-catching features like scalable 3D maps, two-finger map tilt, two-finger map rotate and offline mapping? Right, well it’s only been a week, or so, since Mr. Android himself, Google’s Andy Rubin, mentioned that the new Google Maps Mobile 5 (which he showed off on his fancy prototype Motorola Honeycomb tablet) would be coming to Android OS, and whatdya know, it’s now available in the Android Market for your downloading pleasure!

So, what do you get with this new Google Maps 5 for Android? Well, the highlight here is offline map data caching. That means you no longer need a wireless data connection to pull up map data for the areas that you visit (or search for) most often. Google will cache map data for your most frequently visited areas, allowing you to zoom around the map even when you’re cut off from any form of wireless reception. You can also reroute your Google Maps Navigation route sans data connection. That’s some serious functionality.

On the eye-candy side of things, Google Maps 5 will bring scalable (thanks to new vector maps) 3D maps that render buildings in full 3D (in supported cities). And, since 3D mapping isn’t as fun without map tilting and rotating features, the new Google Maps allows you to tilt and rotate the map to your liking – all it takes is a vertical two-finger drag to tilt, and a two-finger twist to rotate. If you feel like taking a walk with Google Maps, just enable compass mode, and the map will go into 3D mode and start rotating automatically to match what you’re seeing.

So, what are you waiting for? Fire up Android Market right now and update your Google Maps. As long as you’re using a Samsung Galaxy S, Samsung Nexus S, Motorola Droid, Motorola Droid 2, Motorola Droid X, HTC Droid Incredible, HTC EVO 4G, or T-Mobile G2 you’ll be glad you did!

Check out the demo video below.

A report circulating out of Engadget early this morning suggests the DROID 2 Global and the DROID Pro are being...