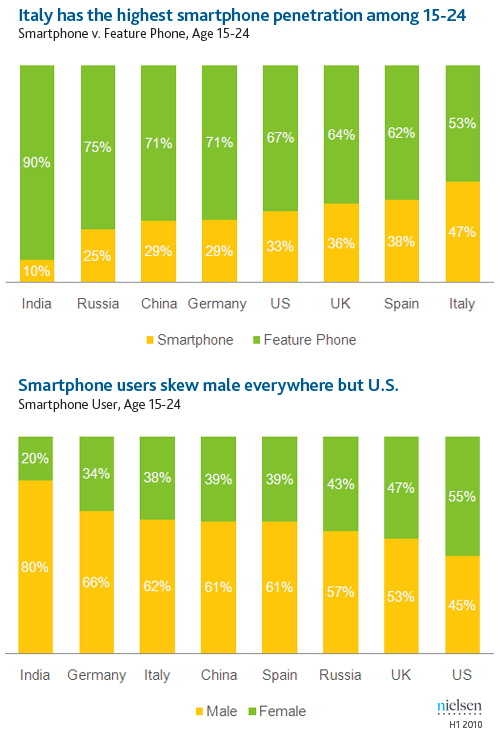 New data has been released by Nielsen detailing how the young people (age 15 to 24) are using mobile technology and it comes as no surprise to many of us that they’re adopting smartphones faster than any other age group. Italians lead the pack with 47% of young people owning a smartphone. It drops to 38% when you look at Spain, 36% in the UK, 33% in the United States, and 29% in both Germany and China. Who is paying for these advanced devices? Only 16% of the people surveyed said that their parents picked their device. When young people select their device price is obviously the most important factor, except in Russia where kids don’t care how much the handset they want costs. Oddly enough, it’s the Brazilians who factor the look and styling of their device as one of the most important aspects taken into consideration when making a new purchase. Nearly 1 in 5 say it’s important, versus a scant 12% in the USA.

Smartphone penetration in Europe measures 28% among the youth, and 27% with adults, so it’s a pretty even playing field. In America however it’s more like 33% of the youth opt for a smartphone, as stated above, while the national average is just 28%. When it comes to boys versus girls owning smartphones, it’s mainly the boys that own the higher end devices, except in the US where young girls purchase 55% of the smartphones sold. The average in America however is 55% male across all age ranges.

It isn’t going to be long until nearly all new devices sold in advanced markets run some sort of smartphone operating system. Whether it’s because people want apps, or they want a rich internet browser, the people have spoken and they want a mobile phone that’s connected to the web. We’ve requested a full copy of the report and will update this post if we find any additional interesting statistics.

In-Stat: This year US operators will spend $1.4 billion on smartphone subsidies for businesses

According to a new report from In-Stat, US businesses will spend close to $27 billion on wireless data this year,...