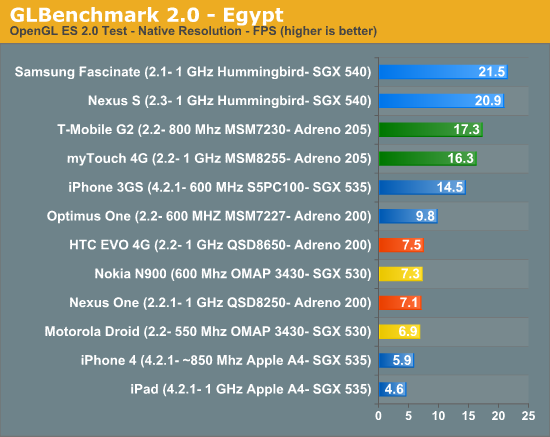 Benchmarking is an interesting sport, and yes I use the term sport, because people spend far too much time crunching numbers that absolutely don’t matter in order to prove something that’s relevant to less than 1% of the population. Take this from a guy who used to scour junk yards for radiators to optimize a water cooling system for a computer that had a solder modified motherboard so extra voltage could be driven to the processor and memory. The latest benchmark suite to be released for smartphones, GLBenchmark 2.0, is an update to the popular yet aged 1.0 version. The new version is used to test OpenGL ES 2.0 performance and is compatible with iOS, Android, Symbian, Windows Mobile, and Maemo. Technology site Anandtech took the time to benchmark the Google Nexus One, LG Optimus One, T-Mobile myTouch 4G, Samsung Fascinate, Google Nexus S, HTC EVO 4G, Apple iPhone 4, Apple iPad, Motorola Droid, T-Mobile G2, Nokia N8, and Apple iPhone 3GS in order to find out who has the fastest hardware of the land.

The winner? Samsung made smartphones utilizing the Hummingbird processor, which is nothing more than a 1 GHZ ARM Cortex A8 chip and PowerVR SGX 540 GPU, absolutely trample everything else. The chart above clearly demonstrates that. Another keen observation is that the Qualcomm made Adreno 205 graphics processor is nearly as fast as the PowerVR SGX 540 and multiple times faster than the previous generation Adreno 200 GPU that was first introduced in devices such as the Nexus One.

Next year we’re going to see not only dual core ARM Cortex A9 processors come out in mobile phones, mainly in the second half of 2011, but 2011 none the less, we’re also going to see next generations graphics hardware that’s upwards of 5x faster than what’s currently on the market. Samsung has said that the GPU in their Orion dual core processor is 5x faster than the one bundled with Hummingbird. Qualcomm has said that their Adreno 220 is 4x to 5x faster than the Adreno 205. We’re just wondering what type of user interfaces will be created using all that pixel pushing power.

One of the reasons we prefer the Symbian and Android smartphone operating systems to something like Apple's iOS is that...