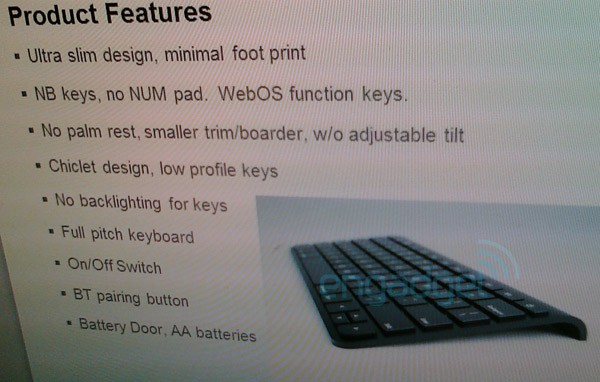 Palm is rumored to be working on a webOS tablet and a recent report out of Engadget suggests the tablet may be codenamed Topaz. Also leaked was a shot of a wireless keyboard accessory for this rumored webOS tablet. The keyboard runs on a pair of AA batteries and will connect to the Palm Topaz device via Bluetooth. Compact in design, it lacks a NUM pad, but includes a set of webOS-specific function keys. Oddly, it also contains a Windows key and may be sold for desktop use as well as tablet use.

The Topaz webOS tablet is rumored to have a slick design with a smooth front-face that is free from any physical buttons. It supposedly shares the same look and feel as the keyboard and is slated to land in early 2011, a tentative launch window that we have heard from other sources, including Palm. Unfortunately, the report did not confirm whether this Topaz name would stick when Palm launches this webOS tablet. HP has recently trademarked a series of names that include unusual terms like Gyst, Myte, and Veer, but, unfortunately, not Topaz.

Palm is also rumored to be developing an entry-level handset that will target teens and tweens. It is supposedly similar to the Pre without a portrait QWERTY keyboard and is expected to follow in its predecessor footsteps by launching on Sprint, AT&T, and Verizon. There may be some truth to this rumor as Palm was supposedly working on four to five handsets and an entry-level offering would be included in this mix.

If this Topaz rumor pans out, lets hope Palm has a companion high-end handset to match. Apple has a nice suite of devices with the iPhone, iPad and a wireless keyboard. It would be great to see Palm roll out a similar trio that runs on webOS. What more could you want for a scaled-down mobile workstation than a tablet, a keyboard, and smartphone?

Skifta for Android Streams from Cloud to DLNA Screens

All you Android media junkies have a new app to stream your media content to your DLNA compatible devices, and...