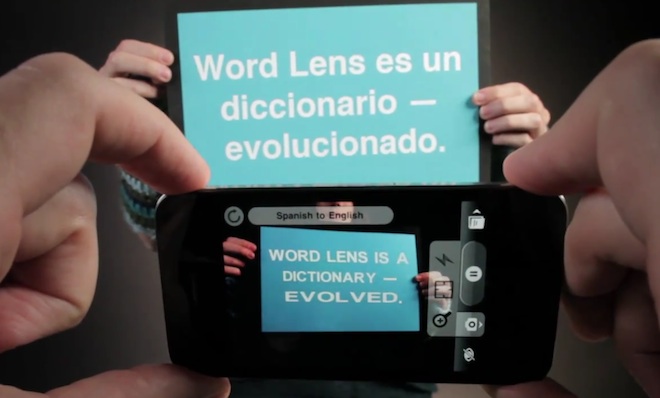 There are a plethora of gimmicky augmented reality applications and services all trying to get the attention of the public, all trying to secure some venture capital, but it’s rare that any of those solutions to problems that don’t exist actually impress. Enter World Lens by QuestVisual. This application lets users point their camera enabled smartphone at anything with text on it, and then boom, instant translation occurs, overlaying the newly translated text on top of the sign you’re viewing. Just watch the video below to truly appreciate how awesome it really is. It took 2.5 years for Otavio Good and John DeWeese to get this right, and we’d be surprised if their little startup isn’t purchased by either Google or Microsoft during the next few months.

The app is free, currently works only on the iPhone (iTunes link), and you pay $5 for a language pack. Right now it only supports Spanish, but there are plans to bring major European languages and even create a version for blind people so they can finally navigate the real world. I remember seeing an application just like World Lens being demoed on stage at CES by Intel several years ago. Back then it required a massive amount of computing, the kind that was only deliverable by a desktop machine. Now, with smartphones featuring high end processors from ARM, going to dual core in 2011, and adding graphics processing capabilities that rival the XBOX 360 and Playstation 3, soon none of us will ever have to be in a situation where we don’t understand the text in front of us.

Best of all, this application doesn’t require an internet connection. That’s right, it’s completely offline. Again, I urge you to watch the video above as it’s easily one of the most impressive things we’ve seen not only in 2010, but in the mobile space, period.

Appsolute Media is out with its new iOS title - Card Power, touting it as an "easy-to-learn, hard-to-master card trick...