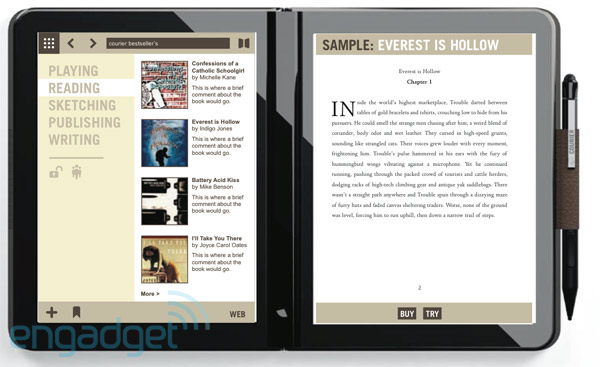 NEC has already dabbled in Android tablets in Japan, but soon (at CES, to be precise) they’ll be showing off something for the North American crowd. The NEC Dual Screen Cloud Communicator Tablet will run Android, have two 7-inch screens, include 3G, Wi-Fi, and GPS, and be stylus-compatible. NEC didn’t mention how exactly those screens will be laid out, but they said that it will be able to run separate apps on either screen simultaneously, which makes me think of the Microsoft Courier concept, pictured above. One can only hope that the software is as cool as what Microsoft was playing with. NEC will also be showing off a single-screen version of this tablet with a camera, as well as a notebook computer running Android.

We don’t hear much from NEC in the mobile sphere, but they do some pretty interesting stuff, like bio-plastics made out of cashews, 12 megapixel mobile camera chips, fuel cells, and e-ink. Despite that, I think they’ll have a hard time wrangling attention away from Motorola’s LTE Android tablet, but I’ll reserve judgement until after I’ve seen both of them on the show floor.

Oh, Google TV was so full of promise but its commercial release has been met with a collective "meh" from...