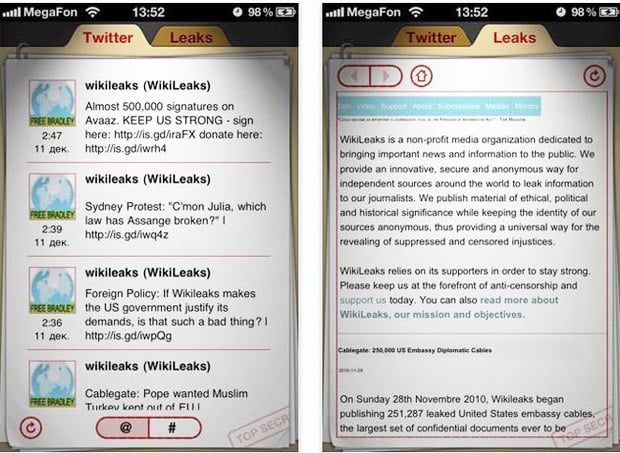 Although it didn’t have its own iPhone app, WikiLeaks did have one made by developer Igor Barinov, who as far as we know is not affiliate with Julian Assange and his crew. And that app has been removed from the AppStore.

While we’re not sure it violated anything in Apple’s TOS, we do realize it was priced at $1.99 providing users to all of the WikiLeaks content, plus updates from the organization’s Twitter account. We’re talking about the controversial content that’s available free of charge, prompting us to think could this be the reason why it was banned by Jobs & Co? Unlikely – there are quite a few paid iPhone apps that are basically bundles of content from Wikipedia. So what’s the deal here? Has Apple been pushed by the U.S. government to join the likes of Visa, MasterCard, PayPal and Amazon to ban everything WikiLeaks? Personally, I don’t think that’s the case either. The truth is most likely somewhere in between – there’s nothing new in Apple’s “remove/ban that app for some reason” policy. Plus, we’re not talking about the official WikiLeaks app here, so I doubt the organization’s fans will hit apple.com. Or so we hope… 😉

mTrip is going beyond iPhone and iPod Touch users for the Android kids. The popular travel content/service company launched a...