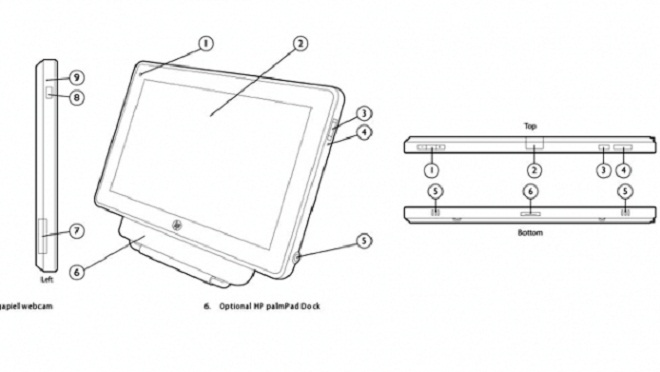 We all know that Palm is readying an Apple iPad competitor for early next year and a few more details about the PalmPad have leaked.

The folks at Fox News got the scoop and the image above, as the PalmPad is expected to be unveiled at the CES trade show in early January and it is expected to be on shelves in March. The report says that there will be three models: one for universities and the education market, and two versions meant for consumers.

The education PalmPad is expected to have a 9-inch screen, will be powered by webOS and it will be customizable for what the university wants. HP, which now owns Palm, expects this to be in schools in Fall 2011.

The consumer version will be going head to head with the Apple iPad and it looks like it will stack up nicely. We’re expecting a 9.7-inch screen, the latest version of webOS, a 3-megapixel rear camera, a 1.3-megapixel front-facing camera, a USB 3.0 port, HDMI-out port and it should weigh in at 1.25 pounds. There’s no word on what chip will power this but Palm used the OMAP processor for its Pre device and we do also know that Texas Instruments is hard at work on its tablet-optimized processors.

The most exciting revelation about the upcoming PalmPad is that it is expected to be capable of using the Sprint 4G WiMax network for mobile data access. There’s no word on what the pricing will be for service but let’s hope there’s a reasonable no-contract pricing option.

So, the PalmPad should generate some buzz at CES but it will be facing some stiff competition. Motorola is already teasing its Android Honeycomb tablet and this may also have 4G LTE service. Additionally, we’re expecting Apple to show off its iPad 2 in late January, so Palm and HP have its work cut out.

[Update] Looks like we may have to call shenanigans on the whole story here, folks, as the image above appears to be exactly the same one used with the HP Slate. It’s possible that this was just used as a stand-in image, but I’d take this with a grain of salt.

A new study released Tuesday said 17% of homes with the Apple iPad have two or more tablets in the...