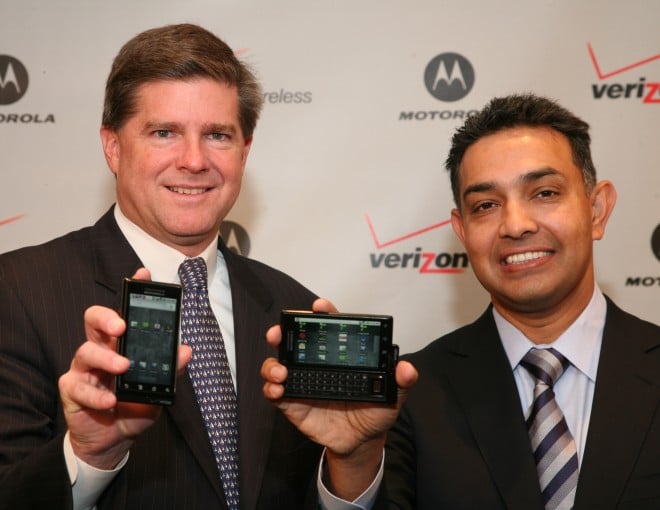 Verizon has confirmed what many of us suspected: it will have a Motorola 4G LTE smartphone in the not-too-distant future.

The company had previously said that it will offer smartphones for its just-launched next-generation mobile data network but it hadn’t named a handset maker. In an interview with the Wall Street Journal, Verizon Wireless COO John Stratton gave Motorola a shoutout.

“We’ve got LTE smartphones on the horizon,” Stratton said. “Motorola will be right there.”

This makes a lot of sense, as the company’s teamed up for the smash-hit Droid handset, which was arguably Big Red’s first credible competitor to the Apple iPhone. This was then followed by the Droid X, Droid Pro and Droid 2, which have all been relatively well-received by consumers and the press.

It would make a ton of sense for Verizon to continue on with this branding and partnership and I wouldn’t be surprised if the Motorola 4G LTE smartphone ran Android and came out with the “Droid 4G” moniker. When you combine this with recent tweets from Big Red, I wouldn’t be surprised if we saw the Motorola 4G LTE handset in a few weeks at the CES trade show.

The Motorola 4G LTE handset won’t be the only weapon in Verizon’s arsenal, as we’ve already seen spy shots of an HTC device with a 4.3-inch screen and access to this next-generation mobile data network. Big Red executives have previously said it will be showing off a “half dozen” smartphones and tablets which can utilize the speedy network, so we’re in for a fun couple of weeks.

While the Motorola 4G LTE phone and Moto’s Android Honeycomb tablet may steal the show, we’re also expecting Sprint to introduce the HTC EVO Shift and this will be able to use that company’s WiMax network. T-Mobile may also introduce a phone or two which can utilize its HSPA+ network for fast mobile broadband.

ViewSonic G tablet pulled due to user experience issue, update on the way

The ViewSonic G tablet is one of the few Tegra 2-toting Android tablets that you can buy at the moment,...