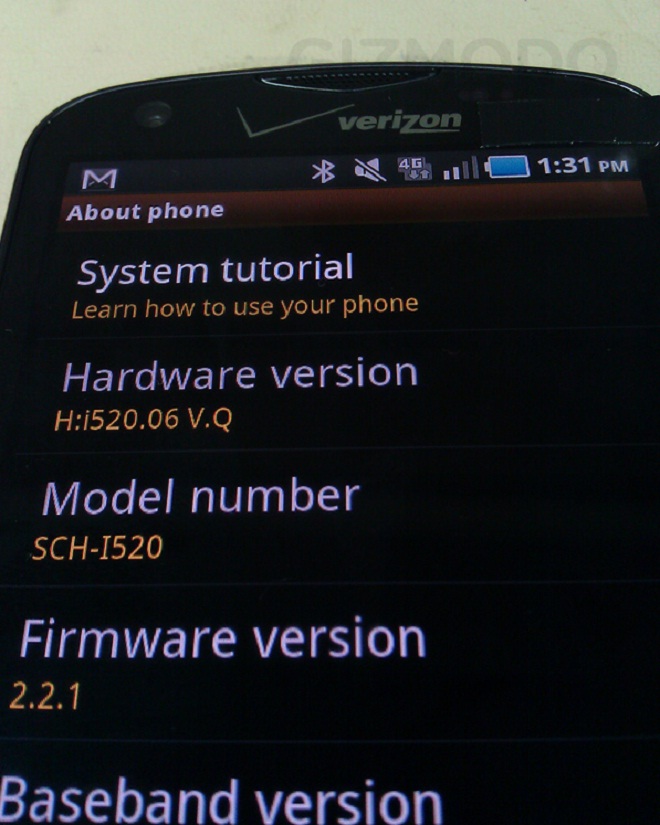 Well, what do we have here? It looks like Verizon isn’t messing around with its upcoming smartphones for it 4G network because a picture of a Samsung Android device with LTE capabilities has just hit the web.

The Samsung 4G LTE phone could wind up being a beefed up version of the Fascinate but the access to the next-generation mobile data network could be a killer feature. Our early tests with the network show that it can give a consistent 6-8 Mbps on the go in multiple markets and airports. That’s not too shabby.

One semi-disappointing thing about this Samsung 4G LTE phone is that it appears like it will launch withAndroid Froyo 2.2, which is a version behind Gingerbread. It could be changed when we finally do see this device released but I wouldn’t be surprised to see the Samsung 4G LTE device have some form of TouchWiz on it, which will make updates take a longer time.

There’s still no word on what the Samsung 4G LTE phone will cost you in monthly service, as Verizon is stillundecided when it comes to smartphone pricing. Sprint charges users an extra $10 a month for devices which can use its WiMax network, so that may be a solid indicator.

When Verizon launched its LTE network, it said it would be showing off half a dozen smartphones and tablets at the CES trade show in January which can take advantage of it. This Samsung 4G LTE phone should join theHTC Mecha and a Motorola smartphone as devices which can utilize the next-generation mobile data network.

Motorola will likely show off its Android Honeycomb tablet at the show too, so is it unreasonable to think that Samsung could counter with a Galaxy Tab that is 4G-capable? That might be a bit of a stretch but I wouldn’t mind seeing it happen.