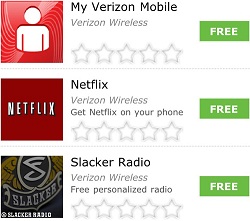 We knew that the nation’s largest carrier would get Windows Phone 7 devices in early 2011 but we may see those handsets arrive very soon, as Verizon Windows Phone 7 apps are already showing up in the Windows Marketplace for mobile.

As you can see from the screen shot, Verizon Windows Phone 7 apps include the manager app, Slacker Radio, Netflix and more. There’s no exact word on what the device or devices will be, but it’s a safe bet to assume that the HTC Trophy could be one of Big Red’s launch devices.

This comes a few months after the nation’s largest carrier downplayed Microsoft’s latest smartphone platform, as then-CEO Lowell McAdam said Apple, Google and RIM were the major operating systems in the United States. Since Big Red didn’t have any devices at launch and rival AT&T did, this was likely just a little jab at the competition.

The move could be a big boost for Microsoft’s smartphone operating system, as Verizon has 92 million potential customers. The company said it has had 1.5 million devices sold in the first six weeks but that’s actually not that great of a number when you consider it launched in 30 countries.

The Verizon Windows Phone 7 app show that there will be devices on the network but there’s no indication that the carrier will push these devices hard. If early January is the expected time frame for an introduction, we already know that Big Red may be occupied by other things.

First of all, we know that Verizon will show off an Android device with LTE and this will likely come with a Droid-sized marketing campaign.

The rumors also indicate that the oft-rumored Verizon iPhone will finally land in early 2011, maybe in March. If that comes true, then I don’t know how much attention Microsoft’s platform will get from Verizon.

LG recently announced the Optimus 2X, billed as the first dual core smartphone to be revealed to the world. That...