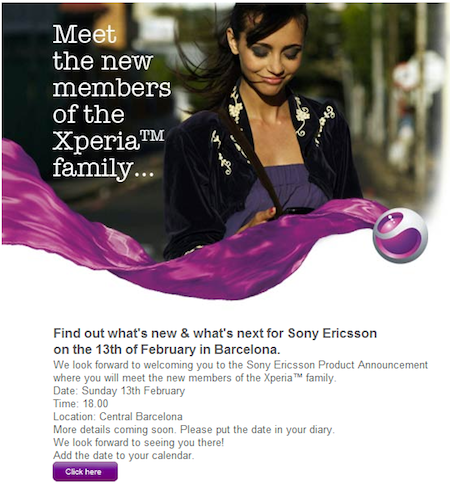 Invitations are going out for a Sony Ericsson event that will introduce “the new members of the Xperia family” on February 13th in Barcelona. The invite does not provide any clues about the handsets slated to be unveiled, but we do recall that Sony Ericsson has committed itself to being the top Android handset manufacturer in 2011. Consequently, several of these new handsets are most likely Android-based. One of these Android offerings may even be the Sony Xperia Play, SE’s gaming-themed answer to the iPhone’s GameCenter and the Xbox Live service of Windows Phone.

To date, the rumored Play is one of the most exciting Android handsets to come from Sony Ericsson. Originally introduced in a patent almost three years ago, the PlayStation Phone has a long history of rumors. Most of the earlier rumors were sparse and only served to confirm that Sony Ericsson was working on a gaming-themed handset. The latest batch of rumors are much more detailed, offering a glimpse at the hardware and the software powering the phone. Even the PlayStation app has been spotted.

All the stars are lining up for the Xperia Play to be unveiled at MWC 2011. The date of this invitation fits in nicely with a previous rumor that suggested the Xperia Play would be unveiled in February. A tipster for Tech Crunch leaked this February time frame and claimed the PlayStation phone provided “the best gaming [the tipster] ever had on a mobile device.” Considering the capabilities of the iPhone 4 and its retina display, that is very high praise for a not-yet-released device. If this rumor pans out and the PlayStation Phone is introduced at MWC 2011, would you be interested in the Xperia Play or are you sticking with the iPhone or a Windows Phone handset for your mobile gaming needs?

The HTC EVO Shift 4G for Sprint might be landing any day now as it has been spotted quite a...