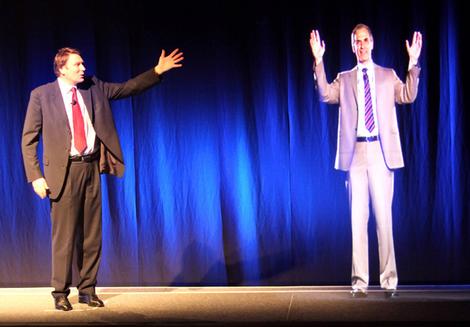 Every year, IBM surveys its 3,000 researchers and asks them what they think will be the dominant new technologies in the next five years. These predictions are usually reasonable in scope and not wild, science fiction-based fantasies. One such prediction from 2010 points to the development of holographic mobile phone conversations. This technology would be an extension of the video calling that we already see with fring or FaceTime but would tke it one step further by projecting a 3D image of the caller in front of the mobile phone’s display. While this would be great for long-distance business meetings, it would be kinda creepy to see in a crowded mall.

Another interesting prediction is the development of air-breathing batteries. This battery technology would use an energy-dense material that needs air to re-charge. As long as you do not store your phone in a vacuum, these air-based batteries would always keep up their charge. The researchers at IBM also predict the development of kinetic-based battery technology that uses movement to generate energy in sufficient quantity to charge a low-power device like a Bluetooth headset.

It will be interesting to see if IBM is correct with their predictions about battery an holographic technologies. Past results show IBM is fairly accurate with their educated guesses. In 2009, they predicted mobile phones would be used as a wallet, ticket manager, concierge and a shopping assistant. With rapid rise smartphone app stores and the arrival of NFC technology, this dream is quickly being realized.

[Via Bloomberg, image courtesy of Telestra]

Man tries to rob Connecticut restaurant with an iPhone

A brazen would-be robber was foiled when the folks he was attempting to rob pulled out knives in retaliation. According...