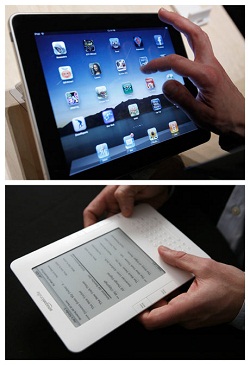 The introduction of the Apple iPad and iBooks had some predicting that the Amazon Kindle and others e-readers were heading for a quick demise. That’s not the case, Amazon says, as many readers are purchasing an iPad and Kindle.

“We’re seeing that many of the people who are buying Kindles also own an LCD tablet. Customers report using their LCD tablets for games, movies, and web browsing and their Kindles for reading sessions,” Amazon CEO Jeff Bezos said in a prepared statement. “They report preferring Kindle for reading because it weighs less, eliminates battery anxiety with its month-long battery life, and has the advanced paper-like Pearl e-ink display that reduces eye-strain, doesn’t interfere with sleep patterns at bedtime, and works outside in direct sunlight, an important consideration especially for vacation reading. Kindle’s $139 price point is a key factor — it’s low enough that people don’t have to choose.”

Of course, Bezos doesn’t specifically name the Apple iPad but I’m sure he’s not talking about the ViewSonic G Tablet. This shows that the devices can coexist for the time being and I think that once the e-readers hit the sub-$100 mark any serious reader won’t have a problem owning a device that’s made only for reading.

Amazon is quite smart to push both the hardware and software side of things though, as the Kindle iPad app is excellent and even syncs your books and reading position across devices. The Kobo iPad app has stronger social features but the library is still not as large as the Kindle version.

So, Amazon is selling boatloads of Kindle e-reader devices (although, it has still not given sales figures) and it’s apps are permeating throughout each smartphone platform and the web. It looks like the other e-reader contenders will have a hard time knocking Amazon off the throne.

T-Mobile is always cracking me up. In a recent commercial, the carrier pokes fun at the iPhone 4 and AT&T....