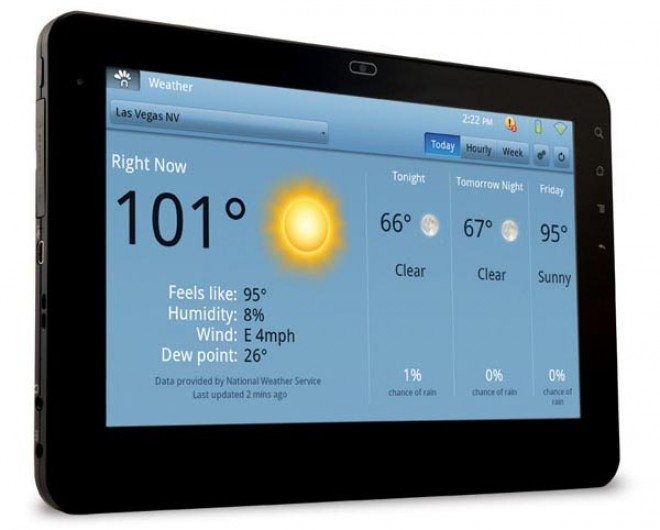 While some of you are waiting until next year to even consider a tablet, be it an Android tablet, the next iPad, Playbook, or the mysterious WebOS tablet, some of you have already jumped the gun. There aren’t too many decent Android tablets out there right now, but the ViewSonic G Tablet. It’s got innards that make it a force to be reckoned with, but you’ll have to get past the disappointing software to really start appreciating its inner beauty.

So, Does the G Tablet have what it takes to take on the big boys next year? Read on to find out!

Available at OfficeDepot for $400

The G Tablet looks as plain as any tablet could get, and I rather like that. The bezel is slightly bigger at the bottom of the tablet, which makes for a better experience when holding it vertically. For the most part, I use the G Tablet in portrait mode, but the stock software doesn’t allow this (more on that later). Coming in at 1.55 pounds, the G Tablet isn’t the lightest tablet around, but it’s something you get used to.

The G Tablet is one of the very first Android devices that ships with 1GHz NVIDIA’s Tegra 2 dual-core CPU. This may become the standard CPU thrown into upcoming Android tablets, and judging by the benchmarks, it’s easy to see why. Unfortunately, the power of the device is diminished by the software side of things, but web browsing and running apps have no issues. The GT comes with stereo speaks on both sides, and they are both enjoyable and fairly loud. Listening to a video or song full blast will cause some vibration and distortion, but it’s nothing that’s too much to handle.

There’s a lot going on on the left side of the tablet, as you’ll find the power button, and below that you’ll find a tab that pulls out to reveal the external MicroSD card slot, and a full-sized USB port. Below that, there’s the mini USB port, one of the two speakers, 3.5mm headphone jack, and charging port. The top of the device houses the volume rocker, and the only thing you’ll find on the bottom is the port for the option docking station.

The front of the tablet is dominated by the 10.1 inch display, but ViewSonic still made room for a front-facing camera above the screen, and the four standard Android navigation keys, which are capacitive (touch-sensitive), on the right side of the screen. You won’t find a camera on the back of the device, but even if you did, you’d likely look a little awkward trying to take a photo with a gadget big enough to house a 10-inch display. Either way, there are more important things to look for in a tablet than a rear-facing camera.

The hardware specs read like a dream, but the software is what brings it all together. Unfortunately, ViewSonic didn’t seems to think that the software needed to be paid much attention… until recently.

The G tablet ships with a customized Android UI called Tap N Tap. To put things simply, it’s horrible. It looks like it was made for the soccer mom on the go, and has minimal functionality. There are large widgets, if that’s what you’d call them, that take up the entire screen, and aren’t all that nice to look at. The only customizations you can do with the home screen is re-arrange the first row of applications, and change the screen’s “widgets” with other supported applications, and there aren’t too many to speak of.

Applications are hiding below a small on-screen button on the homescreen, and when tapped, attempts to give you a nice 3D “reveal”animation. From my experience, this little bit of animation tends to lag and isn’t worth the wait to gain access to your apps. When you actually get to your applications, you won’t find any Google apps at all. That means you won’t be seeing any Android Market on the GT. Instead, you’ll have to go with the gMarket, which is just a link to the Handango website. It’s better than nothing, but some may chose the “nothing” if the gMarket is the only option. Handango doesn’t even have much of a decent selection. To top it off, while the G Tablet supports Flash, you won’t find it pre-installed on the tablet. Instead, you have to side-load the correct version to get it up and running. On a more positive note, the G Tablet comes with a file explorer allows you to side load applications with ease.

Could it get any worse?

You may remember that the G tablet was pulled from Staples stores recently due to a user experience issue. While true, this actually turned out to be a very good thing, as ViewSonic has heard users’ pleas, and has decided to take the device off retail shelves in order to refresh the UI. I only played around with the new UI for a small time, but it’s massively improved from the original software. The homescreen can now be switched from Tap N Tap to a fairly stock looking Android UI that supports real widgets and live wallpapers. While you still won’t find the Android Market on it, there are some other ways to do so.

Despite the G tablet’s somewhat annoying UI layer, it is running on Android 2.2 Froyo. Deemed not worthy for tablet devices by Google, Froyo still boasts a very snappy system thanks to the JIT Compiler, which is said to make Froyo 450% faster than Android 2.1 Eclair. So while maybe not developed with tablets in mind, Froyo still performs like a champ in the speed department, which is to be expected.

If you’ve made it this far, you’ll be glad to hear that the G tablet only gets better from here on out. While hacking your device will void your warranty, and possibly even turn it into a giant brick,, this is really the only way to unlock the true potential of this tablet.

In case you missed it, the G Tablet does not have the greatest out-of-the-box experience that you’d get from other Android tablets like the Galaxy Tab. But, the great thing about having this particular tablet is that developers are already hard at work making custom ROMs for it. Rooting is about as easy as it gets, as it’s done with an app similar to the initial G2 method, only this one gives you permanent root.

There are currently four custom ROMs that are being actively worked on: TnT Lite, Vegan Tab, CyanogenMod and ZPad. Of the three, Vegan Tab is the most popular, and gives you a very stock Android experience. It also helps that this particular little ROM speeds up the tablet in so many ways that it feels like a completely different device. Comparing the benchmark scores from the stock G tablet software to the Vegan Tab ROM is ridiculous, and it was only then that I realized how much potential is actually locked away in this device.

I have yet to try the ZPad ROM, but it also offers up a clean, stock Android UI. CyanogenMod for the G Tablet is nothing more than a port at the moment. We can expect some official support later down the road, but this is as good as it gets with CyanogenMod for now. Since these ROMs are relatively new, they can be buggy, but bugs are better than the software that ships with the tablet. Best of all, these ROMs will allow you to install Google apps, and yes, that includes the new Android Market.

So, while the G tablet isn’t necessarily up to snuff the second you take it out of the box, with a little patience and hackery, you can turn this bad boy into a serious force to be reckoned with. Those of you not willing to hack your device (voiding the warranty in the process) can always side-load a home replacement application, like ADW Launcher EX, which runs great on the device.

We won’t get into how you  hack the G tablet, but if you’re curious,  feel free to check out the resources below. They have everything you may want to know about rooting the device, custom ROMs, and other modifications.

Does the ViewSonic G tablet have a future?

You probably already know that the tablet space is about to explode, and we’ll see the first salvo of Android tablets fired off at CES 2011. A handful of manufacturers are expected to announce their Android tablets, but the one to watch out for is the Motorola XOOM. Shipping with Honeycomb, the XOOM will likely be the best Android tablet available, based solely on the fact that it’s running a tablet-optimized version of Android (known as “Honeycomb”) when most others are running Froyo these days.

So what about the G tablet?

ViewSonic may have initially fumbled with the software, but they are working hard to provide a better experience for their users. When that’s not good enough, the developers will fill in those gaps, and have already significantly changed the way I look at the tablet as a whole. What ViewSonic did get right, however, is the hardware. No, it may not have an HDMI port, back facing camera, or pixel Qi display (like the Adam) that some other tablets will ship with, and you should consider what is important to you before purchasing any sort of tablet. But, because the G tablet ships with what is rumored to be the design reference for the upcoming Honeycomb update, the NVIDIA Tegra 2, I’d say the tablet has quite a bit of life left in it to take on some of the challengers that will debut in early 2011.

I have no doubt that this tablet will eventually have Honeycomb on it, whether it’s official or done by developers. The G Tablet is reasonably priced, and those who are into modding their devices will find a healthy community supporting all your hacking needs.

If you’re not into hacking your devices, then maybe the G tablet isn’t for you, although you still have other options – like home replacements. Basically, it boils down to this: if you’re looking for a solid experience the first time you turn on a tablet, then the GT may not be for you. You’re better off waiting until we see what CES 2011 brings us. But for the price, and the power you can actually get out of this device, it shouldn’t be something to brush off immediately.

If ViewSonic can get their act together and provide some decent software, then the device may be in for the long haul. If not, it’ll remain a hacker’s toy, both of which is fine by me.

Apparently it doesn't take much to call a new smartphone an "iPhone beater" these days - or at least according...