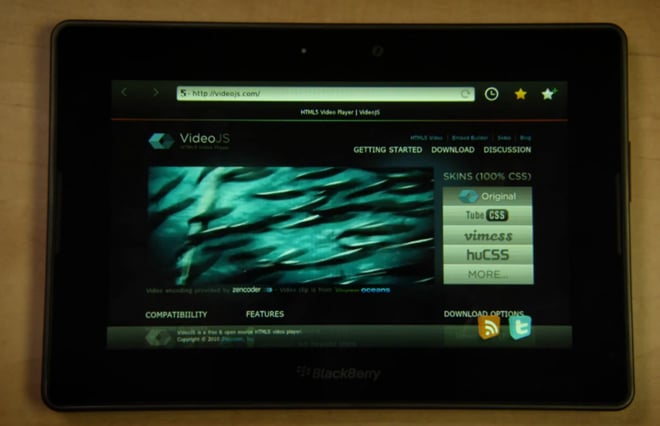 RIM has provided another demo of the BlackBerry PlayBook demo to follow up on their comparison with the iPad. This time, they’re showing how various web video formats run smooth as butter in the native web browser, and how the Facebook experience is just like on a desktop, complete with chat and games. Take a look…

For the more technically-inclined, RIM also posted a video walkthrough of the PlayBook SDK.

For those who haven’t seen the PlayBook before, it’s RIM’s first tablet, with a 7-inch, 1024 x 600 display, Wi-Fi (and tetherable to a BlackBerry for 3G), 1 GHz dual-core processor, 1 GB of RAM, a rear 5 megapixel camera plus secondary 3 megapixel camera on the front. We’re expecting it to land sometime between February and March for between $400 and $600 on Rogers and no doubt elsewhere. Despite the impressive hardware and fancy new operating system by QNX, a lot of folks are already married to Android, or are waiting for the iPad 2.

We’re expecting some hands-on time with the BlackBerry PlayBook at CES over the next couple of days to see if these prepared demos are as good as anything in the wild, but in the meantime, enjoy the videos above.