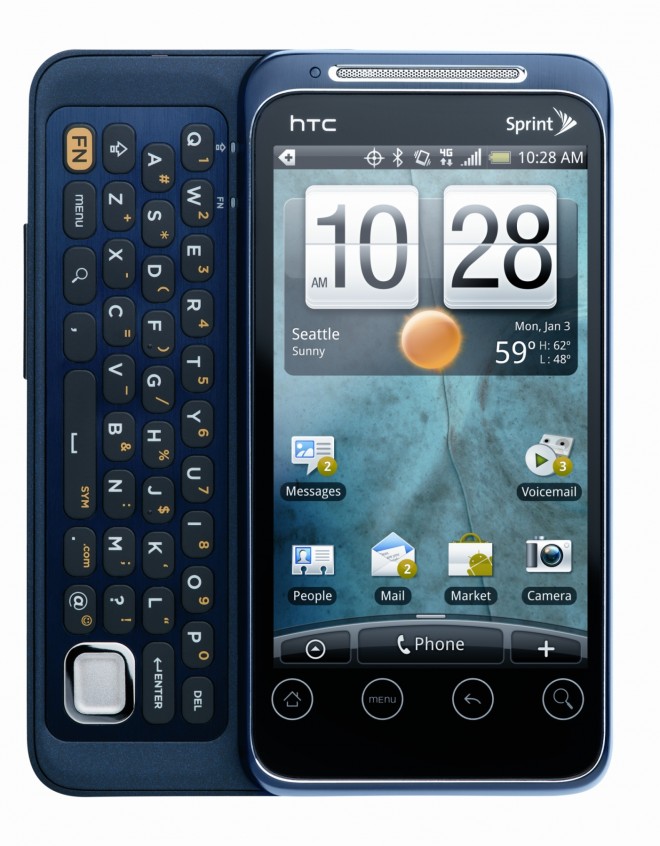 CES is just getting rolling, and we’ve got our first major announcement: Sprint has gone official with the HTC Evo Shift 4G. It’ll be priced at $149.99 on a two-year contract after rebates starting January 9, as rumoured.

All of the rumoured specs panned out, including the 3.6-inch WVGA display, Android 2.2 (including mobile hotspot goodness over Sprint’s WiMAX network), 800 MHz processor with 512 MB of RAM, Wi-Fi b/g/n, a 5 megapixel camera with autofocus, flash, and 720p video recording, plus the usual, like Wi-Fi, 3G, and GPS.

Overall, it looks like it’s a pretty straightforward alternative to the original Evo, the only real differences being the smaller screen and the slide-out keyboard. No doubt our boys in Las Vegas will get some hands-on time with the HTC Evo Shift 4G in the next day or two, so stick around!

Head on over to Sprint’s minisite for more info.

Full press release after the jump. Here’s a quick hands-on video from Wirefly.

“Sprint will continue to set the bar for feature-rich and customer-friendly 4G devices into 2011,” said Dan Hesse, Sprint CEO. “Our proven leadership as a 4G pioneer has allowed our customers to enjoy 4G from Sprint first, and these new products exemplify Sprint’s commitment to put industry-leading performance and capabilities in the hands of our customers.”

A Feature-Rich 4G Phone with QWERTY

As the 16th 4G-capable device from Sprint, HTC EVO Shift follows in the footsteps of the award-winning HTC EVO™ 4G, bringing customers an attractive, compact design and an impressive list of features with the addition of a sliding QWERTY keyboard. Beyond the highly acclaimed HTC Sense user experience, HTC EVO Shift also boasts the power of 4G, Android 2.2™, a 5MP camera, 720p HD camcorder and a 3.6-inch capacitive touchscreen display with pinch-to-zoom capability.

The Web browser on HTC EVO Shift is optimized for convenient mobile use and a full Internet experience with functions like pinch-to-zoom and automatically reflowing text. Adobe Flash technology ensures that rich Internet content, such as embedded video and animation, are displayed the way they are meant to be seen. The slide-out QWERTY keyboard makes staying in touch with friends and family through messaging and social networking quick and easy.

Priced at the lowest cost at launch for any current 4G phone, HTC EVO Shift will be just $149.99 (excluding taxes) after a $100 mail-in rebate and activation on a new two-year service agreement (or eligible upgrade), and activation on a data plan with the required $10 Premium Data Add-On. It will be available in all Sprint retail channels, including www.sprint.com and 1-800-Sprint1, on Jan. 9. For more information, visit www.sprint.com/shift.

Big on Power, Small on Size

With the unveiling of Novatel Wireless’ (NASDAQ: NVTL) ultra-compact MiFi® 3G/4G Mobile Hotspot, Sprint brings customers the portability of the MiFi design with one-touch connectivity for up to five Wi-Fi enabled devices, including tablets, eReaders, laptops or gaming consoles. Delivering a true wireless experience with no cables or software installation required, MiFi 3G/4G Mobile Hotspot has battery life of up to four hours of usage and 60 hours of standby time. MiFi 3G/4G Mobile Hotspot easily supports all the needs of a family household, a frequent traveler who wants to avoid Wi-Fi charges, or even a small business team with a form factor about the size of a credit card.

As the 17th 4G-capable device from Sprint, MiFi 3G/4G Mobile Hotspot will be just $49.99 (excluding taxes) after a $50 mail-in rebate activation on a new two-year service agreement (or eligible upgrade). It will be available nationwide on Feb. 27 at all Sprint retail channels, including www.sprint.com and 1-800-Sprint1. Visit www.sprint.com/4gmifi for more information.

Sprint already offers an extensive and impressive portfolio of 4G-enabled devices and routers. Stand-outs include Dell™ Inspiron™ Mini 10 (1012) netbook and Dell™ Inspiron™ 11z notebook, the first 3G/4G embedded devices offered by a wireless carrier in the United States. Both come pre-loaded with Windows Live Essentials 2011 and deliver 4G speeds on a mobile PC without the need for connection cards or hotspots to access the Internet.

Sprint customers get more with unlimited 4G data on their monthly plan, which means real simplicity and value. Sprint offers simplicity and savings vs. competitors, making it easy for customers to get the most out of their phones without worrying about costs or data usage. Sprint’s Everything Data plan with Any Mobile, AnytimeSM includes unlimited Web, texting and calling to and from any mobile in America while on the Sprint network, starting at just $69.99 per month plus required $10 Premium Data add-on for select smartphones – a savings of $39.99 per month vs. Verizon’s plan with unlimited talk, text and Web, and $35 per month vs. AT&T’s plan with unlimited talk, text and just 2GB of data.

Further, the Sprint Free Guarantee is the only full money-back guarantee on service plans in the wireless industry today, allowing customers to try a new line of service with Sprint for 30 days. If a customer isn’t completely satisfied, they can cancel service and return their device to be reimbursed for the device purchase and activation fee, get the early termination fee waived, get a full refund for monthly service plan recurring charges incurred and get all associated taxes and fees waived. In addition, Sprint will waive the restocking fee for new customer exchanges as part of this policy. Refund excludes usage not included in the service plan, premium content, third-party billing and international charges.