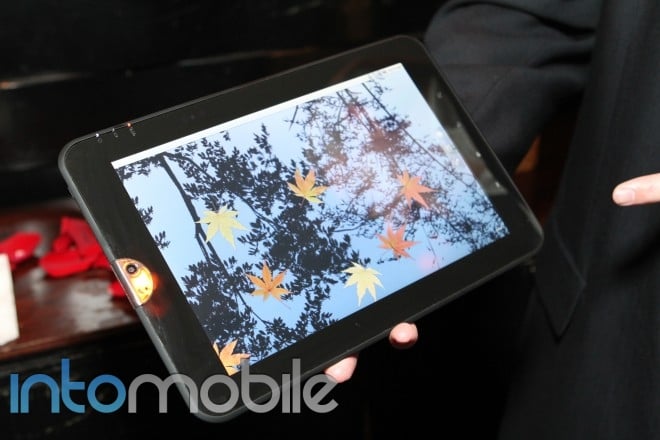 CES 2011 is under way and Toshiba gave us a little hands on of its coming tablet computer. Now, it isn’t the first time we’ve managed to get our hands on a Toshiba tablet, but the last one – the Folio 100 – was a total failure. This time around, with a little help from Google, Toshiba should be putting out a more decent product.

The tablet we had our hands on was running Android 2.2 Froyo, but when it launches it will be running that tablet-optimized version – 3.0 Honeycomb. But it isn’t just the software that’s this puppy’s saving grace, although it is a huge deal, it’s also what’s in the hardware. The Toshiba tablet, which doesn’t appear to have a proper name just yet, also sports the NVIDIA Tegra 2 dual-core processor. All of this embodied in a 10.1-inch touch-screen tablet with a 1280 x 800 resolution and you have yourself a pretty decent computer.

Like all other Android tablets coming out as of late, the Toshiba tablet will feature front and rear facing cameras – 2MP and 5MP, respectively – for snapshots and video calling. It also has HDMI output and lets you watch 1080p HD videos, too.

A somewhat unusual addition is haptic feedback for the keyboard. However, given the typically awkward typing scenarios with tablets, it could be a nice little feature for users who might want a little event or action for every key pressed to give the feeling that something is indeed happening.

Toshiba couldn’t give us any solid launch dates or pricing, but says that it will be competitive with the Apple iPad. Given the iPad’s tremendous success, however, Toshiba should ought to do a little better than just competing with the Apple tablet’s pricing and give those of us who might want an Android tablet some real incentive.

We’re going to get a closer look at the device this week since our time at the Toshiba party was very limited, and we couldn’t examine the device as closely as we wanted. But so far it’s impressive given what the manufacturer has done in the past, so we’ll see how well it really holds up against the competition – namely Motorola who is set to announce its Android tablet this week, too.

Check out the additional images below and stay tuned for our hands-on video!

We knew Asus would be focusing on Android for sometime now, but it wasn't until today that they let the...