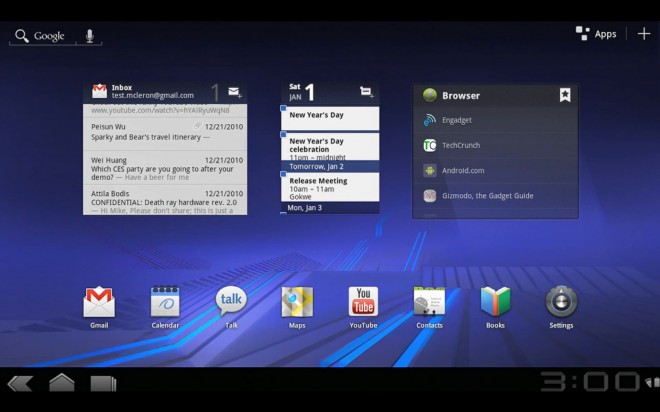 Google has let loose its Android Honeycomb video a little early it seems, as the search giant published, then made private a video showing off its mobile operating system built for tablets. They can’t stop IntoMobile though, as we have the full video below.

The video says Google Android Honeycomb is built entirely for tablets. That means the little green robot will be better equipped to handle the larger screen size and we were expecting this since Andy Rubin talked about this a few months ago.

Google Android 3.0 Honeycomb is also offering what it calls a best-in-class mobile browsing experience and that may be more important as you gain more screen size. The company is also pushing its eBooks service to make these devices strong competitors to dedicated e-readers like the Kindle.

The Gmail app already rocks on phones but Android 3.0 Honeycomb will bring a experience that’s optimized for the tablet. This looks to include dual-pane modes that aren’t much different than what Apple does with the Mail app on the iPad.

There’s also going to be a redesigned YouTube but there aren’t many specifics about that yet. Android 3.0 Honeycomb will also join the mobile video chatting party by letting you use the front-facing camera to video chat with other Google Talk users. This, along with Facetime and Skype, we could start to see video chatting hit the mainstream.

We’re sure to get more specifics about Android 3.0 Honeycomb over the next few hours or days, so keep it locked here for in-depth coverage. Of course, you can always check out our CES 2011 section for all the latest news.

Live from the Samsung press conference at CES 2011

We're live at the Samsung press conference here at CES 2011 where we're looking forward to seeing new smartphones and...