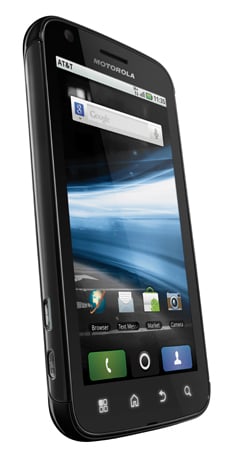 AT&T is touting the just-announced Motorola Atrix 4G as the world’s most powerful smartphone and that may not be too much hyperbole based on the specs.

The device will be powered by a dual-core 2 GHz processor, most likely the Tegra 2 processor. It also has 1 GB of RAM, Android, a large touchscreen, 1900 mAh and all the goodies you’d expect from this type of device including Bluetooth, WiFi, GPS, 3G and 4G.

But I thought AT&T didn’t have a 4G network yet? Well, the company currently has an HSPA+ network (which is similar to what T-Mobile is calling 4G and the company will begin rolling out LTE networks in the middle of this year. The carrier expects to have a full 4G network by 2013.

Motorola CEO Sanjay Jha is very proud of the Atrix 4G and he even showed off an interesting accessory that is essentially a dock that’s an entire laptop. The Atrix 4G and Motorola’s Web Top technology will let the Atrix 4G power the larger device and it will deliver desktop-like experience for browsing and applications.

This is quite a nice surprise, especially considering that we’re just a few days from the Motorola split. The Motorola Atrix 4G, along with the much-rumored Droid Xoom Android Honeycomb tablet, should help that stock get a nice bump.

We’re still digging around for official full specs and pricing and release dates but I’m hoping we won’t have to wait too long for the Motorola Atrix 4G because I really want it.

This isn’t the only 4G device that will hit AT&T’s network, as the company said it will have up to 20 devices by the end of the year. Now, it’s time for Verizon to deliver its counterpunch and we’re expecting it to show off multiple 4G LTE phones tomorrow, as well as a tablet or two. This rocks guys.

Find all of our CES coverage in the CES 2011 section.