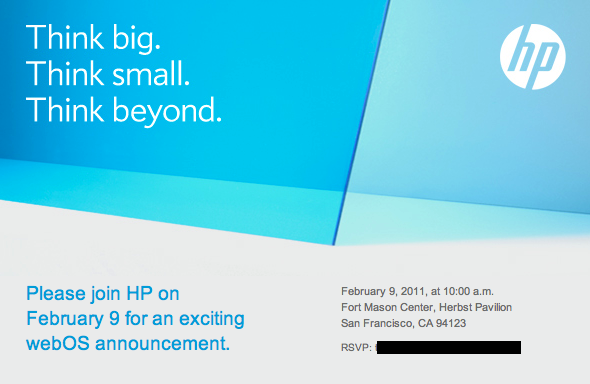 HP Palm (is that what the firm is now known as?) has started sending out invitations to “an exiting webOS announcement” due to take place on February 9th in San Francisco, California at 10:00 in the morning. The text at the top of the invite reads “Think big. Think small. Think beyond.” which can have several connotations. Palm could be encouraging developers to use their imagination in a big way when thinking about creating applications for small screens or, more likely, they’ll talk about their plans for a tablet device. Was it wise for them to host a dedicated event versus showing something at CES? Absolutely. If you’ve been watching CES from afar as I’ve have, you can feel how thick the air smells of misery as technology journalists are bombarded with tablet announcements from seemingly every manufacturer. It was also wise to have a dedicated event on American soil versus saving the announcement for Mobile World Congress in Spain since the international media hardly even recognize the Palm brand.

About a week ago we heard that Palm was making a commercial for a series of devices known as the Broadway, Manta, and Topaz. Brodway is supposed to be their tablet, but code names don’t really matter. Many of us just want to see Palm clean themselves up and return to their former glory. All they have to do is rewrite their Palm Desktop application as a web service, hire some better industrial designers since the Pre looked like a polished turd, and they’ll bounce back. That or just digg up the old Palm OS and make the fonts sharper, add some rounded corners to the buttons, and voila, everyone’s favorite mobile operating system is back and ready to kick some ass.

We’re crossing out fingers since HP is known for swallowing companies and then leaving them to die.