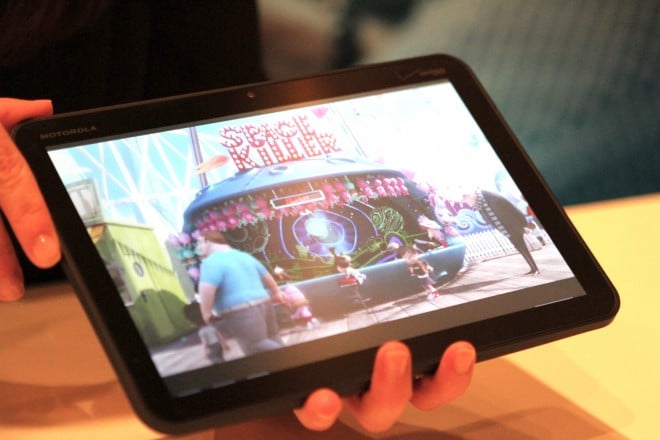 Everyone was expecting Motorola to show off an iPad competitor at CES and the company may have met the sky-high expectations with the introduction of the Xoom Android Honeycomb tablet.

With a 10.1-inch display, the Motorola Xoom Android Honeycomb tablet is quite a site to behold. With a 1280 x 800 16:10 widescreen HD display, it will make HD content pop. You’ll have a variety of ways to get content on the device, as is has a full browser with Adobe Flash 10.1 support.

Like the Atrix 4G, the Motorola Xoom Android Honeycomb tablet has a dual-core processor at up to 2 GHz. That’s a lot of power to pump out full 1080p HD videos and you’ll be able to enjoy those on larger screens with the HDMI out port.

The Motorola Xoom Android Honeycom tablet will also launch in the first quarter with 3G support but it will be available with Verizon 4G LTE support in the second quarter and all existing version will be upgradable, just as we figured.

This will run the 3.0 version of the software and this has been optimized for the larger tablet size. That means the user interface makes it easer to throw on multiple widgets and apps and it has a very polished look while still fully feeling like that green robot we all know and love.

Unlike the current iPad, the Motorola Xoom Android Honeycomb tablet has multiple cameras: a 5-megapixel in the back that can capture 720p HD video and a 2-megapixel one in the front for video-chatting via Google Talk and other apps. Of course, that’s with the current iPad, as we’re expecting a revamp in the not too distant future.

The software is still not finished on Motorola’s tablet but we’re very impressed that it was able to deliver a product that appears to be top of the line.

We’ll have a more complete review of the XOOM when the time comes. For now, pass the time with the hands-on photo gallery and video (will be uploaded soon) below!

Verizon announced one of its newest 4G LTE smartphones at CES 2011 yesterday - the HTC Thunderbolt. The latest Android...