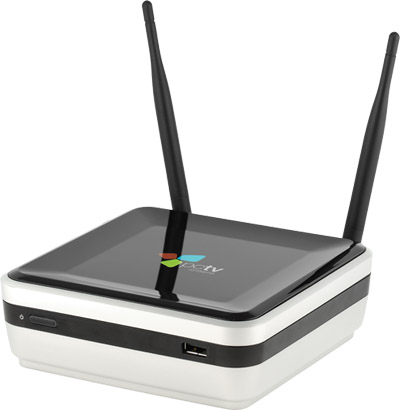 Hauppauge Digital announced a new product for the TV addicted iPhone, iPod Touch and iPad users. The so called “Broadway” works as a standalone box that once connected to a cable TV connection or a TV antenna on one end and router on the other, allows you to bring your TV experience with you, no matter where you happen to be.

The new product builds on top of Hauppauge’s WinTV Extend software which required a PC to operate. Broadway is completely stand alone, and is low power so it is always ready to send live TV to your Apple device.

Included in the mix is a high definition H.264 video compressor that takes TV programs from clear QAM digital cable TV or ATSC over-the-air TV and “shrink” these programs into a form which can be displayed on an iPhone or iPad. In addition, Broadway also has a built-in multi-format TV receiver which can tune to digital cable TV channels and ATSC over-the-air broadcast TV channels, and then compress those TV channels and rebroadcast them over both WiFi and the Internet. Finally, it can also receive and convert analog TV into a form which can be watched on the iOS devices.

Broadway will be available in North America in about six weeks when interested folks will be able to grab it for $199.

iCADE Transforms Your iPad into a Retro Arcade Gaming Machine

If you love arcade games, but don't have the means, the space, or the desire to pack a whackload of...