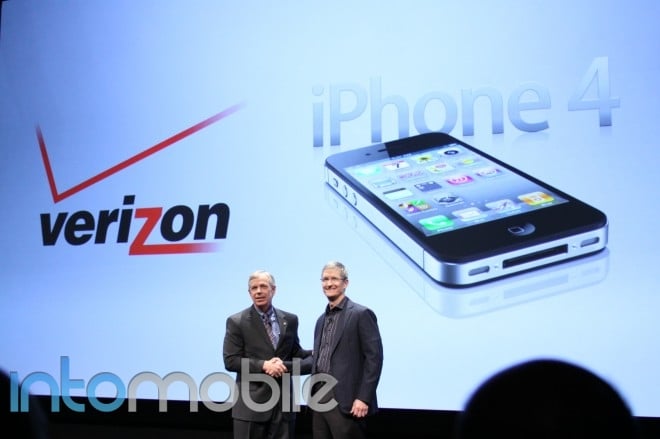 After years and years of rumors and waiting, the Verizon iPhone 4 is here and it will launch in February. We heard the news this morning at a Verizon press conference and you can check out our live blog for a recap.

The Verizon iPhone 4 will be coming Feb. 10 and the base model with 16 GB will cost $199.99 with a new, two-year contract and the 32 GB model will cost $299. Users can sign up for details on this page and pre-orders begin Feb. 3 (for currently qualified customers). It will be sold from Verizon and Apple’s online stores first and then

Besides the CDMA chips inside, the Verizon iPhone 4 doesn’t differ much from the version which landed on AT&T last summer. It will pack the A4 processor inside, a 3G personal hotspot option for up to five devices, 5-megapixel camera with 720p HD recording, front-facing camera for FaceTime video calls, the sleek, double-glass design and the stunning Retina Display. You can also look for the external antenna around the sides of the device and this was the main culprit for the so-called Antennagate.

The Verizon iPhone 4 should come as sweet relief to many AT&T users who are frustrated by the service on Apple’s smartphone, particularly in major cities. While AT&T generally has a good network, using the iPhone in places like San Francisco and New York can be an awful experience.

While the Verizon iPhone 4 may provide more consistent coverage in certain areas, the 3G-only device may not be as fast as AT&T’s in ideal conditions. In fact, AT&T has been talking trash about how users won’t like having to adjust for the “slow lane” that is CDMA data.

Big Red just announced a slate of 4G LTE phones but something tells me that the Apple handset will outsell all of those devices combined this year. It’s finally here, so who’s going to get one? Are you willing to pay an ETF to leave AT&T?

For all of you that have been waiting patiently for Verizon and Apple to join forces and release a CDMA...