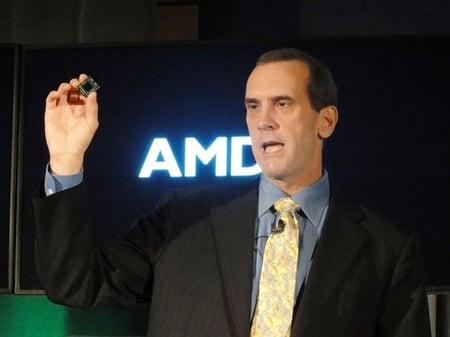 In another sign that the mobile space is going to be the future of reporting, Reuters is reporting AMD CEO Dirk Meyer is departing because the board wasn’t happy with his vision for the chip maker in the increasingly-competitive mobile segments.

AMD CEO Dirk Meyer resigned a few days ago and reports are surfacing that many weren’t happy with his overall vision for the chip maker. The move comes as we’re in a massive shift in what computer chips need to do to keep up with current trends.

It used to be that a chip maker like AMD had to provide enough power for (primarily) Windows machines on the desktop or within laptops. We’re now in a spot where a processor has to be able to deliver a lot of power but still not be a huge drain on the battery so that it can fit into a smartphone or tablet.

“Strategically they (the board) didn’t feel like Dirk was taking them down the road they wanted to be on. They wanted to be on the Yellow Brick Road toward tablets and smartphones,” said Patrick Wang, an analyst at Wedbush, told Reuters.

AMD is now in a tough spot because the competition isn’t going to wait around for it to get its act together. Nvidia and its Tegra 2 chip was one of the major stars of CES 2011 because it powered many of the lust-worthy devices. Nvidia also has an impressive roadmap planned for the mobile side of things.

Qualcomm was the go-to chip maker for high-end devices next year with its SnapDragon processor and it has already announced a dual-core version. We could see devices with this as early as Mobile World Congress in February.

The Intel giant is still also dragging its feet a bit in the mobile space but you can be sure it will be a major competitor. I suppose it’s better for AMD to realize how important the mobile space is now, rather than in a year or two.