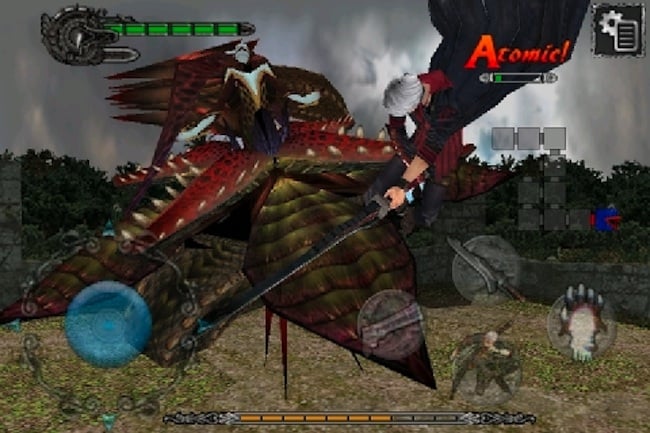 If you’re a fan of action titles that involve hacking n’ slashing wave after wave of enemies with either a sword, a gun, or in the case of the Devil May Cry series, both, then you’ll be delighted to know that Capcom is going to be delivering an iPhone port of Devil May Cry 4 later this month.

Devil May Cry 4 Refrain will follow the same story as its console counterpart where players will assume the role of Nero instead of Dante. Nero plays pretty much plays identical to Dante, and if you didn’t know any better, you might assume you were playing as Dante, but Nero has a demonic hand that he can use to attack his enemies with and access parts of the game world by pulling himself from spot to spot. As Nero defeats opponents, he’ll receive orbs which can be used to unlock new attacks and moves.

In the iOS port, players will be able to customize their button layout to allow to attack with Nero’s guns and sword individually as two separate buttons or combining them to one button. Altogether, you’ll be fighting your way through 10 levels with a number of boss battles to fight through. Devil May Cry 4 Refrain will have Retina Display support as well as future updates which will allow Dante to be playable as well as the possibility to offering extra challenge modes.  The release date is set for later this month and it’ll sell for $6.99.

The Devil May Cry series has always been know for its action and fast pace. I’m curious to see how Capcom can translate the game’s console experience to the iPhone as I tend to button mash the hell out of my controller when it comes to a Devil May Cry game.Hopefully my iPhone can withstand the pummeling it’s going to receive when Devil May Cry 4 Refrain is released. Although, if Street Fighter IV has taught me anything, it’s that when it comes to porting console games for mobile devices, Capcom knows what it’s doing.

Rope Cut is the Cut the Rope clone for Android

While Android smartphone users are waiting for ZeptoLab and Chillingo to finally bring their super-popular Cut the Rope title to...