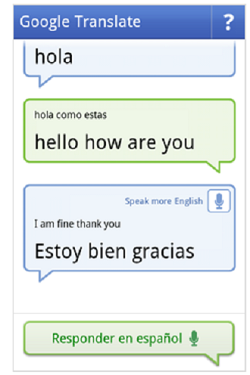 Google Translate for Android is just about to hit its one-year birthday and the search giant has just released a host of user interface improvements, as well as a conversation mode which could make this app more useful when speaking to others who don’t speak the same language.

If you don’t know what the Google Translate for Android app is, I’ll let you know that it’s some very sci-fi stuff. You speak or type a word into the app, it sends it back to Goog’s servers and it then sends you the translation into another language and it will even speak it to you with the proper pronunciation.

As for the Google Translate for Android updates, you can look for a refined user interface to make it easier to work with. This includes a cleaner layout, rejiggered icons and drop down menus.

The cool thing about the Google Translate for Android is an experimental feature called conversation mode. It only works with English and Spanish at the moment but this is aimed at making it easier to actually speak with someone in a foreign language.

According to the search giant’s mobile blog:

. In conversation mode, simply press the microphone for your language and start speaking. Google Translate will translate your speech and read the translation out loud. Your conversation partner can then respond in their language, and you’ll hear the translation spoken back to you. Because this technology is still in alpha, factors like regional accents, background noise or rapid speech may make it difficult to understand what you’re saying. Even with these caveats, we’re excited about the future promise of this technology to be able to help people connect across languages.

Download it today and let us know what you think.

Google Places for iPhone Gets Hotpot Reviews and Recommendations

Google Places for iPhone just got an update to include the Hotpot review and recommendation service that launched on Android...