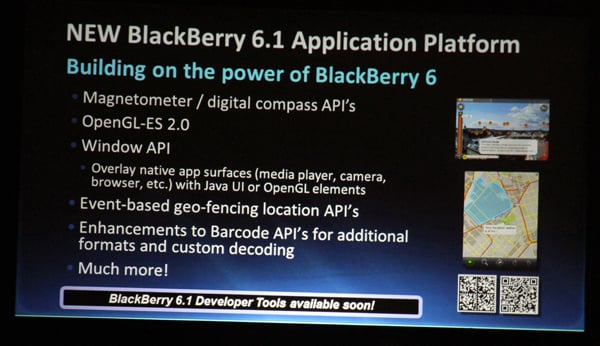 On top of the new WebWorks SDK for the PlayBook and Payment Service, RIM made another announcement at DevCon Asia yesterday: developer tools for BlackBerry OS 6.1. The new OS will include stuff like a magnetometer (better known as a digital compass, so your phone can tell direction), support for OpenGL-ES 2.0 for better 3D graphics, a window API to enable overlays on native apps, geo-fencing APIs so you can get alerts when you’re within a particular area, and enhanced barcode APIs to support additional formats. While the tools weren’t quite made available, they are coming “soon”.

The magnetometer and overlay support combined will enable developers to make augmented reality apps, that is, using the phone’s camera, showing the image it sees on your BlackBerry’s screen, and overlaying it with pertinent information depending on how it’s facing. This is great for getting yourself oriented with directions to destinations that might be a little tricky to figure out with the standard top-down map view alone. OpenGL-ES 2.0 doesn’t excite me too much, since RIM still doesn’t make many phones with the supporting 3D graphics chip.

BlackBerry OS 6.1 will apparently be launching in the next quarter or two, which gives us some idea for the timeframe of the Dakota which leaked today and was rumoured to run 6.1. I imagine the “much more” referenced in the slide above will include NFC capabilities that will supposedly be built into the Dakota, but who knows what else will come in the next update. As for existing devices, it’s likely that devices that launched with OS 6, like the Style, Torch, and Bold 9780 will be eligible for an upgrade, and with a bit of luck, BlackBerrys like the Bold 9650, 9700, Curve 9300, and Pearl 9100 (which are all compatible with OS 6) may be able to squeeze in. With this announcement, it seems like for the foreseeable future, we won’t be getting QNX on smartphones, unfortunately.

We've heard the code-name Dakota tossed around for some time, mostly in reference to a BlackBerry in the traditional candybar...