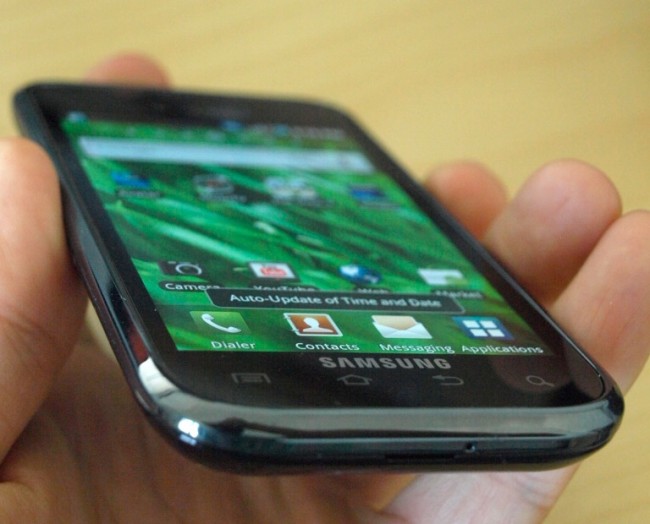 Conspiracy theory fans who own a Samsung Vibrant take note. A circulating rumor from a tipster that claims that Samsung has put the brakes on the Android 2.2. update for the popular Galaxy S handset offered by T-Mobile. This tip was sent to both AndroidSpin and Android Central. According to the theory, the highly anticipated Froyo update is ready to roll out over the air to handsets and T-Mobile is anxious to get the process started. Samsung has reportedly told T-Mobile not to disseminate this update because it does not want the Vibrant to compete with the upcoming Vibrant 4G.

Details on the Vibrant 4G were uncovered earlier this week thanks to a leaked internal T-Mobile document. The Vibrant 4G is the expected successor to the Vibrant and offers the few notable enhancements. The next generation Galaxy S handset is expected to have a front facing camera, Android 2.2 and, as its name implies, 4G HSPA+ connectivity. The Vibrant 4G should be capable of the full 21 Mbps download speeds available on T-Mobile HSPA+ network.

It would be scandalous for Samsung to deny Vibrant customers an update because it wanted to stimulate sales of the Vibrant 4G. This scenario paints a different portrait than the friendly, helpful face that Samsung puts forth to its customers, which makes us questions the authenticity of this rumor. For those that are interested, the entire tip is published below for your perusal. Read it in its entirety and let us know what you think. Does it tell the truth behind the Vibrant’s delayed Android 2.2 update or is it just a disgruntled employee misinterpreting the situation?

I started a Field Trainer for [redacted] and I am now [working Android] at T-Mobile. Some disturbing things have happened the last week or so concerning our “Vibrant”. Samsung has NOT allowed us to push the update OTA for 2.2 because they feel it will decrease the value of the upcoming Vibrant4G +.

While from a marketing aspect I totally understand, as the Vibrant 4G is what the original Vibrant should have been in the 1st place. But to shun off and bold face lie to customers is NOT what T-Mobile is about.

Trust me when I tell you, we had an update for the original G1, and HTC begged us not to. In 75% of the cases known to me in my [time] here and my [time] dealing with Android I will say that honestly most upgrade hold offs were the Manufacturer and NOT us as some believe. But we catch the flack.

I am tired. [redacted] I am up to here with Samsung. They pulled the same thing with the Behold 2 that I MYSELF had to clean up and caught wind over. The update to 2.1 update 1 is existant yet Samsung (for marketing reasons) felt that it would be better to just move forward. Samsung’s only concern is general sales, NOT RETENTION. They could care less if you buy the phone, get pissed and cancel T-Mobile contract. All they care about is they got your sale.

So pushing out anything like 2.2 or 2.3 is not in the books as something they plan on doing. It has nothing to do with bugs. The US version of Froyo for the Vibrant works flawlessly as I am using it now. But they feel that would be
1 less thing to brag about when Vibrant 4G launches. Being that Vibrant 4G and Vibrant have exactly same stats, added FFC and a new movie and the 4G.

But i will tell you this. the original vibrant CAN utilize 4G FULLY. Yes FULLY. Not what they are telling you. [Later clarified as “I do not mean Hardware is capable of 4G. I’m saying theoretical speeds of up to 5mbps. We already have publicly said that most would see a speed increase and be able to utilize the 4G speeds of our network.”]

We were prepared for this with the update which would change the 3G to a 4G logo when in HSPA+ areas. But Sammy again said NO! I writing you so we can honestly move forward. Maybe customers will file a class action will get them off the chair and make them move. Hopefully the information contained herein will help you with an editorial on this serious issue and not blind the people with the “P.R. answers” being given by Sammy’s Twitter accounts and Customer Service.

[Via Android Central and AndroidSpin]