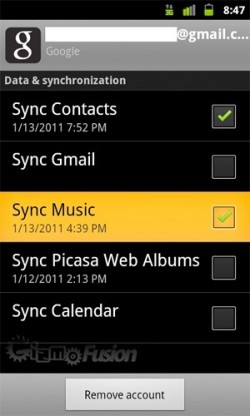 Today, all that talk of the Nexus S running Android 2.4 is beginning to sound believable. Judging by the screenshot above, Gingerbread devices may have a tasty little treat coming to them in the near future: Google Music.

Last we heard about the project, Google had yet to sign any deals with record labels, but who knows what has happened in the time since then. We recently got a glimpse of what the service will actually bring to the table, and yes, Apple should take notice. Google Music will allow users to have their entire music library on their home computer (DRM-free, of course) streamed directly to their phone, allowing the user to free their phone’s onboard storage for other types of content, such as apps and photos.

Google Music will likely be implemented into the Android Market, at which point we should also see the online version of Market going live. With the online Android Market, you can download apps and music on your computer, and have it sent directly to your phone. In essence, this is possible with the Chrome to Phone feature, but instead of websites and Maps directions, you can send yourself a music album or apps without looking at your phone at all.

When we saw the Nexus S running 2.4 yesterday, we were a bit skeptical, and wondered, “What could be so different that in the OS that it deserves it’s on version number when it looks like nothing has changed?” Well, as it turns out, a lot can change with just one feature, and we hope that Google Music will get real sooner rather than later.

Streaming your home computer’s music library to your phone isn’t all that new, but Google selling music is. While Apple will likely continue to maintain their stronghold on the music download space with iTunes, if there is anyone who can really challenge the fruit, it’s Google. As it stands, most people today use iTunes, many of those users also use Android. Having a built-in music store on their phone may just be what it takes to give iTunes the boot. Maybe.

We really have no idea when this may hit phones but hopefully sooner rather than later. Would you switch to Google Music from iTunes if you had the option right from your Android phone, or do you just download music like the rest of the world?