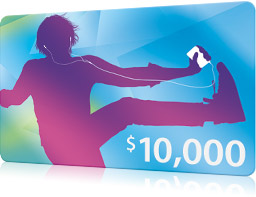 Apple confirmed today that it is nearing the 10 billion download milestone for the iOS App Store. The Cupertino company just launched its countdown page and is at approximately 9.7 billion downloads at the writing of this post. As it has done in the past, Apple is sponsoring a giveaway that showers the person who downloads the 10 billionth app with an iTunes gift card worth a whopping $10,000.

If you do not have an iOS device or can’t stand to spend money to join a contest, you can enter for free using Apple’s alternate entry form. Each entrant is limited to 25 entries per day and the contest ends when the magical 10 billion milestone is reached.

Apple’s App Store has grown by leaps and bounds. When it launched in 2008, the App Store recorded over 10 million downloads in its first weekend of operation. Nine months later and the App Store had skyrocketed to over 1 billion downloaded applications. This trend of ever-increasing sales has continued with another billion added to the tally every three to five months. Now, almost two and a half years after launch, Apple is poised to hit the coveted 10,000,000 mark. Given the success of the App Store and the wide distribution of iOS devices, is anyone really surprised by these numbers?

The Zumobi Network, which touts itself as the "leading premium mobile app network," has teamed-up with the Popular Science magazine...