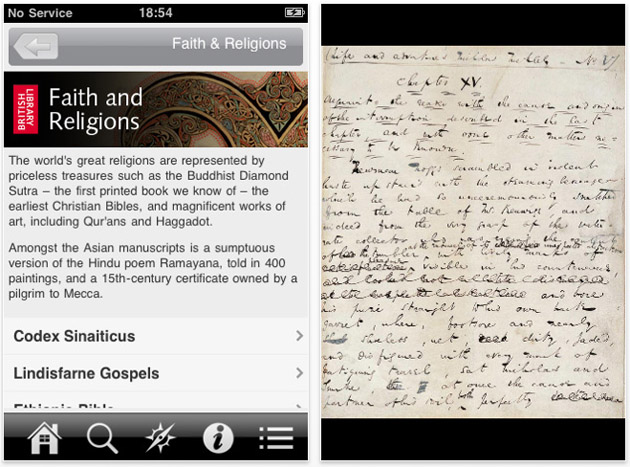 The famous British Library is launching its first smartphone apps for two of the hottest mobile platforms – Apple’s iOS and Google’s Android. Called Treasures, it presents a rich selection of the items featured in the Library’s Sir John Ritblat Treasures Gallery, including over 100 of the Library’s greatest collection items, 250 high-definition images, over 40 videos, textual interpretations, as well as up to date information about current exhibitions.

Among the items you will be able to explore are such things as the first edition of Alice’s Adventures in Wonderland, the world’s oldest bible Codex Sinaiticus, Nelson’s Battle Plan, Galileo’s letters and Leonardo Da Vinci’s notebooks. Expert commentary is provided on many of the items and users can watch, for example, videos of explorer Ben Fogle talking about Scott’s Diary and Linguist David Crystal discussing the 1,000 year old poem Beowulf.

Furthermore, literary highlights include Charles Dickens’s handwritten draft of Nicholas Nickleby and Jane Austen’s teenage writings, while key historical documents include 2000-year-old Oracle Bones from China and an original Magna Carta of 1215. Music historians will appreciate manuscripts from some of the best-known classical composers, such as Handel, Purcell, Mozart and Schubert, alongside hand-written lyrics by The Beatles. And there’s more, like religious texts, scientific documents and so on.

Introductory price (until January 24th) is set at $1.99 for smartphone apps and $3.99 for the iPad version.

After iPhone and Symbian, ABBYY is bringing its Business Card Reader app to the Android users. Just like their app...