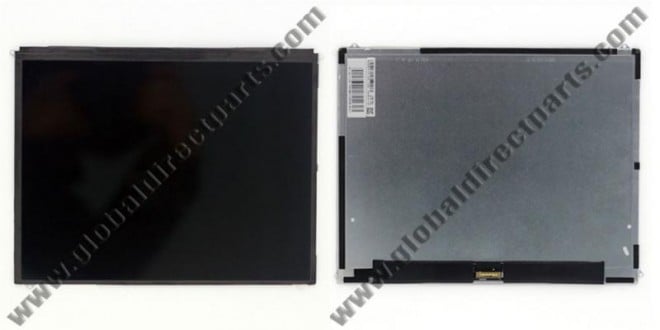 Following up on some of the iPad 2 details from this morning, parts retailer GlobalDirectParts has listed what they were calling the rumoured tablet’s LCD screen, though it’s currently out of stock. The $218.19 pricetag is more than double what they’re asking for the original’s screen, granting some legitimacy to the rumoured 2048 x 1536 resolution of Apple’s next tablet. It’s worth noting that the first iPad’s LCD was a bit more expensive at launch, but even then it was only $144.99.

Other supposed specs for the iPad 2 include twin cameras, dual-mode CDMA/GSM connectivity (sorry, no LTE), an SD card slot, and a dual-core processor. There was also talk about a USB port, but that’s up in the air right now. It’ll probably cost between $599.99 and $699.99, depending how much storage you want on it, based on some Best Buy listings. Presuming the it stays around the 10-inch size and actually boasts the high resolution, it would come out to a pixel density of 256 PPI; not quite the iPhone 4’s 326 PPI Retina display, but still pretty damned good in the world of tablets.

Anyway, there’s not much way to verify the legitimacy of this listing, but if true, that means assembly could be underway, and that April launch window wouldn’t seem too unlikely at all.

Verizon is going to have one killer line-up soon with a number of powerful smartphones: Apple's iPhone 4, the Motorola...