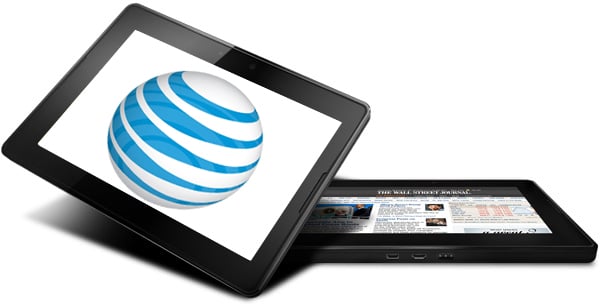 The Wi-Fi BlackBerry PlayBook tablet will be hitting store shelves in March, and Sprint will be launching a WiMAX version later on this year, but what about the 3G variant promised at the launch announcement? Yeah, you’ll be able to tether a BlackBerry smartphone for 3G access on the Wi-Fi tablet, but that won’t do for folks who just want a tablet with no more strings attached than maybe a wireless contract. Luckily for them, rumour has it that AT&T is prepping a 3G version of the PlayBook to launch in late March or early April, and that the LTE variant should be available shortly thereafter.

A 3G PlayBook is great news since it will eliminate the need to tether (and hopefully Bridge, if an OS update is available by that time), and won’t be as dependent on coverage as WiMAX or LTE. One can only assume that if AT&T is getting an LTE PlayBook, Verizon will be too, but I’m not quite as sure about T-Mobile, who insists HSPA+ counts as 4G too. It would be nice of RIM to make a pseudo-4G tablet for them, but I wouldn’t hold my breath. Hearing that a 3G PlayBook is on the way is good news for those of us outside of the U.S., since 4G networks are few and far between internationally.

In any case, the AT&T rumour lines up well enough with the various other launch windows we’ve heard about, so it doesn’t sound altogether unreasonable, even if there’s no documentation to back it up.