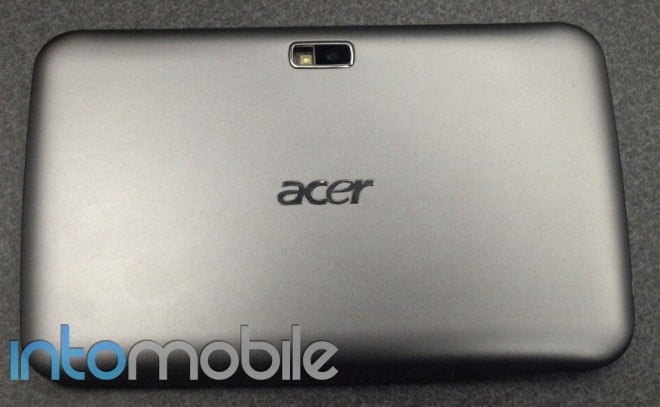 The 2011 calendar year will finally be the year that the iPad gets some serious competition in the tablet space – and Acer is not going to take it lying down. At CES 2011 earlier this month, we had a chance to get up close and personal with the Acer 7-inch Android tablet. It’ll launch with Android 2.3 Gingerbread OS (hopefully upgrade-able to Android 3.0 Honeycomb) and will be powered by the next-generation Qualcomm Snapdragon dual-core processor clocked at an impressive 1.2 GHz and capable of “asynchronous clocking”.  We didn’t get any time to play with the custom Acer UI 4.5, but the hardware itself bodes well for Acer’s fight against the mighty Apple iPad. 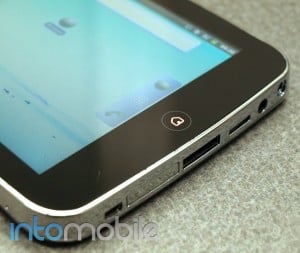 First off, you’ll notice that there’s only one navigation button on the tablet. The single “Home” button adorns the front face of the tablet as a touch-sensitive capacitive button, which lights up from underneath like an orange-hued beacon to help you navigate the Android Honeycomb OS. Sure, tablets running the Honeycomb version of Android OS won’t really need any navigation buttons, but it’s nice to have at least one familiar button on the front of a tablet. It’s almost reassuring that, no matter what happens, you can always get home. We didn’t get to spend any time with Honeycomb or Acer UI 4.5, as the device was running Android 2.3 Gingerbread without the custom UI at the time.

The tablet will launch later this year with its 7-inch display, spec’d at 1280 x 800 WXGA resolution. It’ll also be capable of supporting Adobe Flash 10.1 Player and will be churning through all your high-powered apps and 3D games, thanks to Qualcomm’s new 1.2 GHz dual-core Snapdragon processor and the Adreno 220 GPU. There’s a rear-facing camera with LED flash, with a front-facing camera for video calls, should you feel like sharing yourself and your surroundings with friends and family.

As for the hardware, it’s good stuff. The tablet feels like a premium product, with sturdy construction and enough heft to help convince you that this is a high-end device. Sure, it might just be our brains tricking us into believing that something with a solid,dense in-hand feel is something that is more expensive, but we’re not complaining here. Unfortunately, the shiny, metallic-looking plastic trim doesn’t really stand up to the “is it metal?” sniff test. The backside of the tablet, though, redeems itself from the disappointment of the plastic trim pieces. It has a grippy surface that’s also clean and sleek.

One aspect I wasn’t too keen on was the fact that the tablet’s bezel isn’t parallel to the screen. The edges of the tablet curve outward, creating a more “rounded” silhouette (see the top image). Now this is personal preference — and likely a niggling, inconsequential one at that — but I think the curved edges conflict with the straight lines of the display. To each his own.