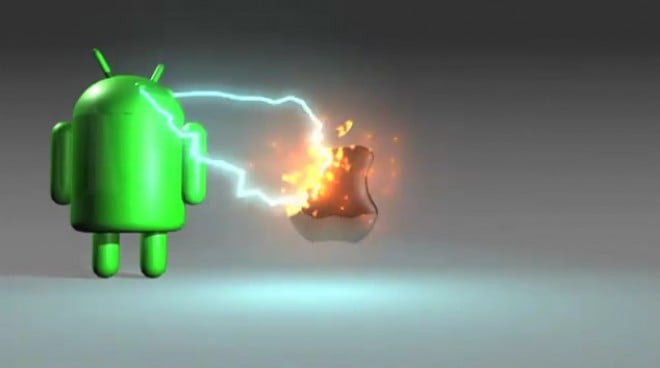 We’ve seen this fanboy war go back and forth for some time now. As Android grows, more and more of these users are gaining a large disdain for the iPhone, and Apple, in general. Apple fans return with their rebuttals, and the cycle goes on. This won’t stop anytime soon, but at least one Android fan got creative in their Apple-hating displays of affection for Google’s mobile OS. Below is a fan-made video of Android literally incinerating its fruity counter-part.

I’m obviously an Android fan (you can add in the -boy part if you so choose), but the hatred between the platforms is getting a bit silly if you ask me. I’ve used iOS devices before, and really have little complaints about it as a whole. It’s just not for me, which is likely the case for many of these Android fans out there, but it just seems to be easier to just say you hate something. At least that keeps it interesting?

The video was made for a 3D animation class, and the creator saw it necessary to force his opinion on everyone, and what better way? As one of the comments on the video suggests, I wouldn’t be surprised if this video ends up being a start-up boot animation for some custom ROMs in the near future.

So you’ve seen the Android side of things. Now, Apple fans, it’s time to get on your response. We know it’ll likely be more polished, a little arrogant, and very simple, but we wanna see it! Keep in mind that this is all in good fun, so don’t let your allegiance to your mobile OS of choice get too out of hand. While they are very different operating systems, iOS and Android are absolutely killing it in the market today. There’s enough room for both.

As hinted at in a leaked Vibrant 4G timeline yesterday and again last week, the Motorola Cliq 2 was made...