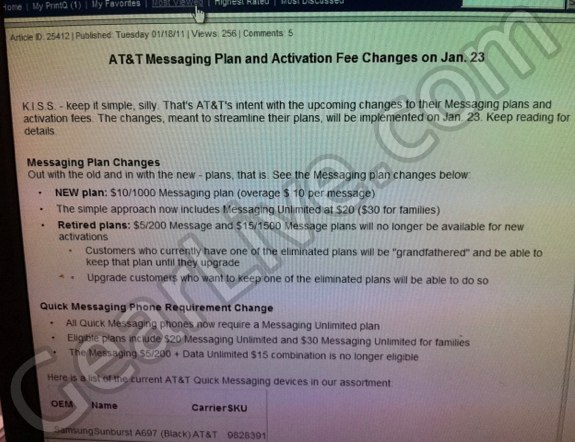 It looks like AT&T is getting ready to give its current and new customers some incentive to stay despite the expected exodus of users wanting the Verizon iPhone. There is a rumor that says Verizon is going to be offering unlimited data plans with the iPhone 4, whereas new AT&T customers are limited to 2GB at most unless they want to pay more for overages. Now, AT&T is sweetening its text messaging bundles as some mild form of enticement.

While it’s doubtful that more texts for the money will keep AT&T customers from leaving – assuming that’s the reasoning behind this, it might not be – it’s better than nothing.

According to a recently leaked document, AT&T is offering a new text messaging package: 1000 text messages for $10. Unlimited messaging is $20, and $30 for families as it has always been. The $5 for 200 messages and $15 for 1500 messages will be phased out.

Come to think of it, simplifying the plan probably has absolutely nothing to do with the Verizon iPhone at all. It just makes the choices for customers a little easier. It’s simpler to remember 10/1000 and 20/unlimited than it is 5/200 and 15/1500 along with everything else. You’re not getting a better deal with the $10 plan because you get the same number of messages per dollar.

The Wi-Fi BlackBerry PlayBook tablet will be hitting store shelves in March, and Sprint will be launching a WiMAX version...