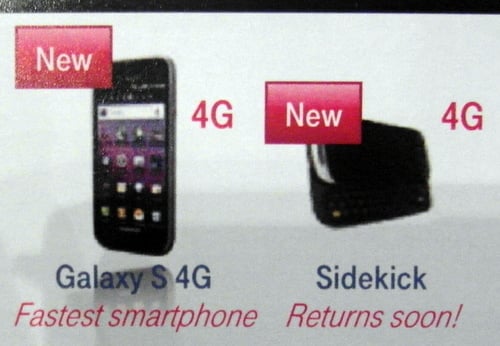 An Android-based, HSPA+ (or “4G” if you prefer) Sidekick is coming soon to T-Mobile, along with an HSPA+ Samsung Galaxy S, said CEO Philipp Humm at a press breakfast.

Aside from a launch window in the first half of the year, there weren’t too many details given, but we’ve seen plenty of the upcoming Samsung Vibrant 4G, namely that it’ll have a new forward-facing camera, run Android 2.2, and hit the streets on February 25. T-Mobile killed the last Sidekick model in July, but will likely see even more popularity than it did now that it’s running a new OS with a rich application market. No doubt it’ll keep the signature swiveling screen which reveals the physical QWERTY keyboard which them young’uns just love for texting. I’m curious who’s making the new Sidekick now that Microsoft owns Danger, though… Would the Windows phone maker be comfortable with a subsidiary churning out an Android handset?

With Mobile World Congress just around the corner, we’re likely to see both of these bad boys in Barcelona, where we’ll be able to glean more specific specs and hopefully some hands-on time with these as well as whatever else Samsung has in store.

When T-Mobile USA decided to label their 21 Mbps HSPA+ network as "4G", we were a little disappointed. At the...