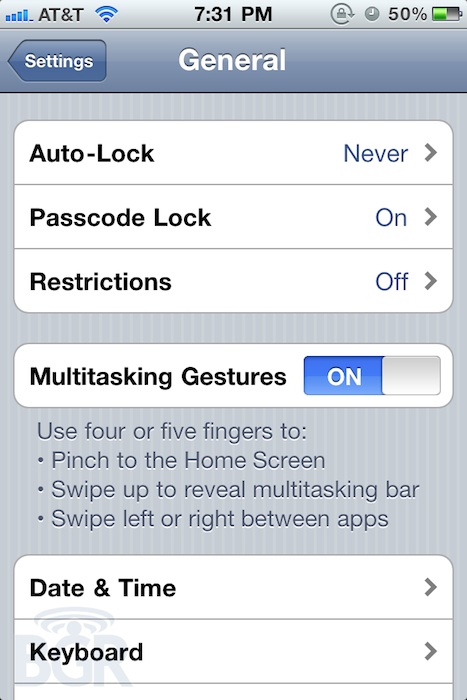 When Apple released a beta of iOS version 4.3 out on to the internet, one of the first things people noticed was that it gave the iPad multitouch gestures. Users could swipe up with four fingers to reveal the multitasking toolbar, pinch inward with five fingers to go back to the home screen, or swipe left and right between applications. Apple even demoed these same gestures as a part of their “Back to Mac” event where they talked about the next version of Mac OS X, 10.7 Lion, due to come out this summer. One thing people on the net started discussing is whether multitouch gestures would make the home button obsolete. After all, one of the big features of Android 3.0 is that it isn’t going to require any dedicated hardware buttons. Even Nokia said that they think in the future all the front of a mobile phone will be comprised of it a sheet of glass; no buttons.

Several screenshots from The Boy Genius report have leaked and give an indication that Apple is testing out the same multitouch gestures that we saw on the iPad, on the iPhone and iPod touch. How exactly would you be able to use four and five finger gestures if you’ve got large hands is something we don’t quite understand, nor do we grasp how we’ll be able to use all the features of our device single handedly.

We’ll have to wait and see how Apple plans on selling this concept. It’s basically webOS when you think about it, except Palm has it so that you use your thumb to bring up the launcher, a swipe up to reveal the applications you’ve got installed, and their cards UI is, in a nut shell, switching between applications by swiping from left to right.

Imitation is the sincerest form of flattery.