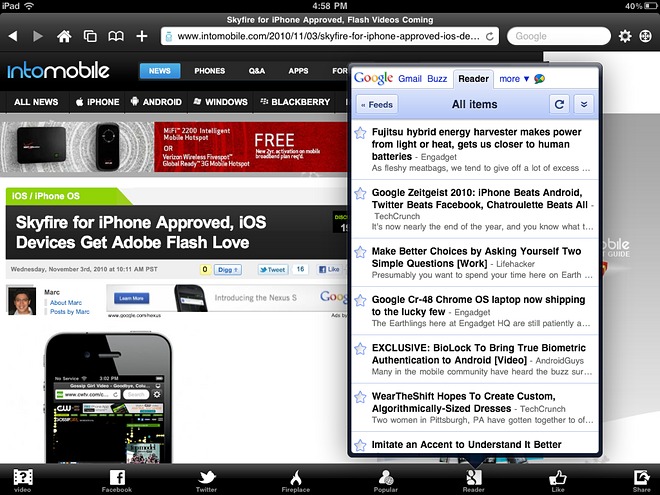 Skyfire, one of our top iOS apps for 2010, has been doing quite well for itself. The app has been satisfying the iOS user’s craving for Adobe Flash videos on iOS devices despite Apple’s assurance that lack of Flash content wasn’t a big deal in its mobile Safari browser. What Skyfire does is simple: it transcodes Flash videos into iOS-friendly formats so we can eat up all the video and bandwidth we want. The only thing it doesn’t do is handle non-video Flash content like games, but that’s hardly a deal-breaker for this application.

While it went on as a free app for so long on other platforms, it decided to break the pay barrier when it jumped into the iOS scene. And it was perfect timing. When the iPhone version hit for $2.99, it was so outrageously popular that Skyfire couldn’t handle the load and had to temporarily pull the app from the iTunes app store. Slowly, but surely, it started trickling out again in bundles. Since then, it has been enjoying some pretty solid and steady sales.

Shortly after the iPhone version of Skyfire launched, the iPad version was announced and approved. For the bigger screen, the Flash-friendly browser would go for $4.99, but that didn’t deter anyone from buying it. Skyfire is said to be prepping its announcement for sales figures soon and it looks like it has sold 200,000 copies of the app. That’s about $1 million in gross sales, and $700,000 after Apple takes its share of the sales.

Bravo to the team that has been behind this relatively new app. It’s not incredibly rare that we see such runaway hits like this, but it’s still amazing nonetheless.

If you’re an iPhone or iPad owner, have you already purchased this app? Feel free to share your experience with it in the comments.

RealPlayer for Android Updated with Playlist Support and Homescreen Widget

The RealPlayer media client for Android has been updated with a bunch of UI tweaks, plus a new homescreen widget...