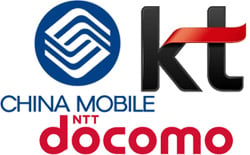 Three of the leading mobile operators in Asia — China Mobile, Japan’s NTT DoCoMo and South Korea’s KT — are forming what they call a “broad-based business tie-up” to explore opportunities in the region.

The three companies will set up a business cooperation committee to take advantage of trends such as “the further globalization of corporate activities” and the growing penetration of smartphones. More precisely, the partners will look at international roaming, enterprise services, LTE, smartphones and common platforms as areas they can exploit. Moreover, a DoCoMo spokeswoman also mentioned mobile apps and contactless payment systems as something worth considering.

DoCoMo and KT already offer joint services which for instance allow DoCoMo travelers in Korea to take a KT number and save on roaming costs. The newcomer to the relationship will definitely want a bigger slice of the pie considering its financial power. China Mobile has 570 million mobile users, while DoCoMo and KT have 57 and 16 million users, respectively.

Watching the giants partner for the benefit of the consumer is not something you see every day. That said, we’ll be watching where this goes and let you know as soon as something new comes up…

IK Multimedia, the company behind quite a few music centric apps and accessories for the iPhone, announced the formation of...