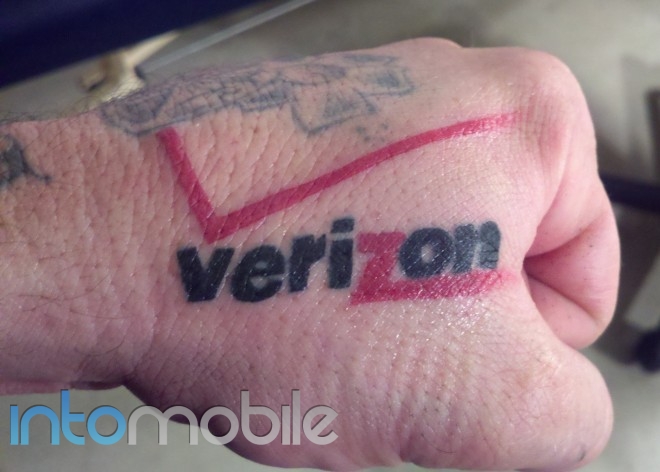 So say you’re one of Verizon Wireless’ biggest fans. Say you’re also a professional tattoo artist with easy access to the tools of the tattoo trade. What do you do to show the world that you’re the No. 1 supporter of Big Red’s burgeoning 4G LTE network? You tattoo the company’s logo on your body, of course. That’s what one Daniel Carrion decided to do – he stamped the corporate logo right on his hand, permanent-style (we’re pretty sure a tattoo lasts a really long time).

But, it doesn’t end there. Mr. Carrion apparently wants to get another Verizon tattoo — this one bigger and way more conspicuous than the one on his left hand — and he says that his forehead is the best place. The forehead. Forever.

Just to show he’s not fooling around, Carrion supplied us with the video you see below. He’s touching up the tattoo on his hand – cleaning up the borders and edges and whatnot.

The big question, of course, is why is he doing this? Carrion told IntoMobile that he’s “just a really, really big fan of Verizon Wireless,” and that the idea to put Big Red’s logo on his body (for life) came to him “while [he] was paying his monthly bill.” We gotta hand it to the guy for putting ideas into action so quickly.

When asked if he was looking to get publicity in some way or looking for any kind of compensation from Verizon by putting a the corporate logo tattoo on his hand and forehead, Carrion replied that “Verizon probably spends millions in advertising and marketing every year, I’m not doing this to get money, but sponsoring my tattoo would be a relatively cheap way to increase brand exposure, and I wouldn’t turn down any compensation.” He continued to explain that the forehead placement would ensure that “the logo will be in front of all my friends and anyone I run into on a daily basis.” It’s clear that this Big Red customer is seriously dedicated to the Verizon network.

Hey Verizon, if you’re seeing this, Mr. Carrion is probably your biggest fan. We’re sure he’d love to talk to your marketing department. Jussayin’.

Last week we saw the unveiling on the new iPhone 4 made strictly for Verizon. The CDMA Apple smartphone is...