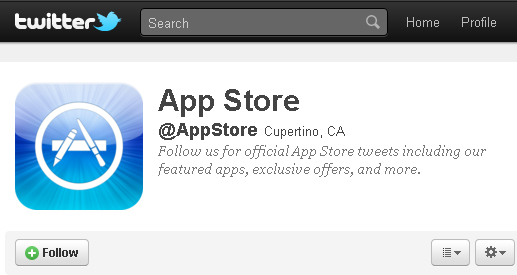 The traditionally stoic Apple has opened up another Twitter account to join their smattering of existing iTunes accounts. @AppStore went live recently, with the express goal of helping folks “discover new apps, get exclusive offers, and share with friends.”

The account isn’t verified quite yet, so it could in theory be fake, but it seems pretty legit to me so far; I somehow doubt Nike would fake an Apple account to pimp out their app to 13,000 followers. Oddly enough, none of the other major app stores, like Ovi, App World, or the Android Market have anything similar (at least nothing official). Seems like something of a no-brainer to me, especially since a lot of those stores already generate RSS feeds for the latest apps.

Microsoft thinks Apple’s claim to the “App Store” trademark (and likely this Twitter account, by association) is too broad and general, and I’m tempted to agree, but I doubt anything will come out of their lobbying the U.S. Patent and Trademark Office. Anyway, there’s not much to say about it right now, but if you’re a fiend for iPhone apps, and spend more time on Twitter than in the App Store, you can follow the new account here.

Are you a huge Black Eyed Peas fan? Do you own an iPhone, iPad or iPod touch 4th gen? Love...