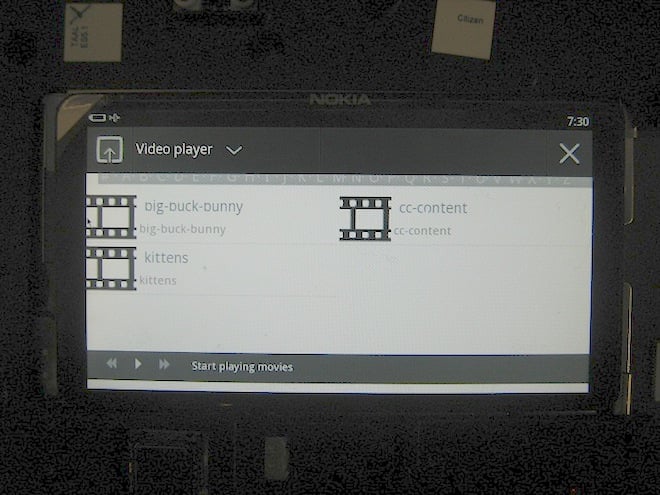 The image you see above supposedly surfaced on bugs.meego.com according to Tablet-News, meaning some poor Nokia developer is about to get fired. It appears to be a tablet like device, and it’s running a stock, as yet to be named, version of MeeGo. For those who forgot what MeeGo is, it’s Nokia’s latest attempt at trying to impress people again. It was first called Maemo, and a string of devices were launched with the platform, the last one being the Nokia N900 which was the sole Maemo device to come with a cellular radio, meaning it could make phone calls and send/receive text messages. At Mobile World Congress 2010 Nokia got on stage with Intel to announce that they’re going to combine Maemo with Moblin, Intel’s attempt at making an operating system for netbooks, and call the bastard love child MeeGo. The first MeeGo products were supposed to come out in time for the 2010 holiday season, but like everything at Nokia, it got pushed back. Now we’re hearing that 2011 will be year Nokia is going to blow everyone’s wad, which from this point forward will be known as worst case of blue balls to ever be recorded in human history; the resulting user experience will be unlike anything we’ve ever seen before according to the Finns.

But anyway, back to the photo. It’s a screen, with a thin bezel. It could be 4 inches, it could be 4.5 inches, does it really matter? Nokia lost the hardware battle a long time ago when everyone started jumping on top of the Qualcomm Snapdragon and ARMv7 bandwagon. Many of you will say that Symbian is awesome because it performs remarkably well on old hardware. Truth of the matter is no one cares about that. They want a spiffy browser and a few games from EA. Can’t deliver? You end up in the discount hardware section of a small family owned electronics store.

Specs? None. Launch date? None. Price? None.