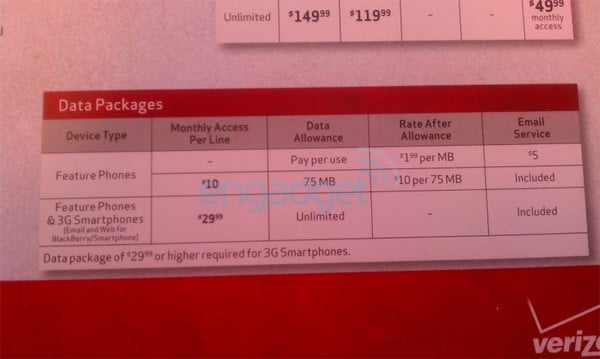 Leaked documentation from Verizon Wireless suggests the wireless carrier is once again updating its data plans for both feature phones and smartphones. The changes will hit casual smartphone users the hardest as Verizon is apparently removing the cheaper $15 option that provides 150 MB of data. Verizon is going back to its original data pricing by offering only an unlimited smartphone plan for $30. Old timers on Verizon will remember those days of owning a Windows Mobile handset and having to cough up $30 for unlimited data. From the signage, these changes may be implemented soon, which makes us question whether Verizon is simplifying their plans for the upcoming iPhone launch.

The Verizon iPhone 4 will be made available to current Verizon customers as a pre-order starting on February 3rd and will officially launch on the 10th. History has shown that the iPhone lends itself to heavy data consumption and large numbers of new subscribers, a situation which can significantly boost the data traffic on a wireless network. Verizon may be looking to maximize its return by forcing millions of these new customers onto an unlimited plan.

Verizon may also be trying to avoid overage charges which are likely to occur when you have a feature phone user who jumps to a smartphone. Some analysts have predicted the arrival of the iPhone 4 on Verizon will start a mass exodus of feature phone users who are ready, willing and able to jump into the easy-to-use iOS-based handset. These same users may not be data savvy and would be shocked to see a $1000 bill after they accidentally used a cellular connection to stream their favorite videos. 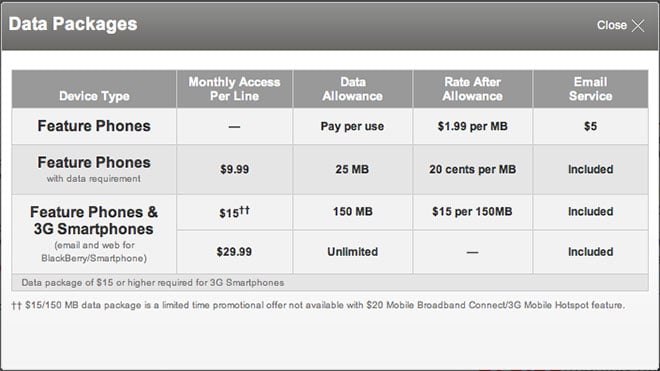 Engadget, the source of this leak, also suggests these changes are being implemented to pave the way for its LTE handsets. They point to the inclusion of the term “3G smartphone” and not “smartphone” as an indication that Verizon is looking to separate its 3G smartphone lineup from its upcoming 4G smartphones. Yes, the wireless carrier does sometimes refer to its Android, webOS and BlackBerry handsets as smartphones, but when it describes its data plans, Verizon currently uses “3G smartphones” in its description, as shown above. This usage of this term is not new and is most likely not an indication that the carrier is targeting these revised plans for EV-DO smartphones only.

The traditionally stoic Apple has opened up another Twitter account to join their smattering of existing iTunes accounts. @AppStore went...